Child of (?) Alfflaed and Aethelred II "The Redeless", King of England

Joseph and Elizabeth resided at Uxbridge. Captain Joseph Taft was a farmer, his land lying on both sides of the Blackstone river, and his residence being on the west side. He was a lieutenant and captain in the militia, and bore a conspicuous part in the conduct of town affairs, both in Mendon and, after the separation in 1721, in Uxbridge. He gave each of his sons a good farm. His descendants were on these farms for many years, and many hove sought homes in other States. The line has been represented in the military, the legislatures, on the judicial benches of Massachusetts, Vermont, Michigan, Iowa and Ohio, and in the national executive cabinet, as well as William Howard Taft President of the United States.
Joseph was born. He was the son of Robert Taft and Sarah NN----. He married Elizabeth Emerson in 1708. Joseph died at Worcester, Uxbridge Counaty, Massachusetts.

M, d. 1651
The ancestor of this family wrote his name "Robert Botfish", yet on the records it is written Botfish, Botflish, Bodfish, Badfish, Bootfish, and, Boatfish. He was early at Lynn, a freeman 5 May 1635, and of Sandwich in 1637, of which town he was one of the original proprietors. The Indian title to the lands in Sandwich was purchased by William Bradford and his partners for the Old Plymouth Company in 1637, for 16lbs, 19 shillings, payable in commodities, and 24 January 1647, they assigned their rights to Edmund Freeman, and on the 26 of February following, he assigned the same to George Allen, John vincent, William Newland, Robert Botfish. Anthony Wright and Richard Bourne, a committee of the proprietors of the town of Sandwich. In 1640, the meadow lands were divided, giving to each in proportion to his quality and condition, Robert Bodfish had five acres assigned to him, a little less than an average amount.

January 1, 1638 Robert Bodfish desired to become a freeman of the Plymouth Colony; in 1641 he was a surveyor of highways; in 1644 on the grand jury, and the same year licensed to draw wine in Sandwich.
He married Bridget NN---- before 1651.1,2 Robert died in 1651 at Barnstable, Barnstable, Massachusetts.3,4

M, b. 3 April 1651, d. 2 December 1744
Joseph Bodfish, the ancestor of all of the name in Barnstable. He resided at West Barnstable, his house was on Bursley's Lane, on the farm owned by the late Lemuel Bursley.

When he was eighteen, Plymouth had been settled fifty years, and though liberal bounties had been paid to English and Indians for wolves' heads, yet these ravenous animals abounded in the Colony. In 1654, the whole number killed was nineteen of which tree were killed in Barnstable, and in 1655 thirty one, nine in Barnstable. In 1690, the number killed was thirteen, and in 1691, nineteen. Jonathan Bodfish said his grandfather could set a trap as cunningly as the oldest Indians, and that the duck or the goose that ventured to come within gunshot of him, rarely escaped being shot. Wolf Neck, so named because it was the resort of these animals, was about half a mile from Joseph Bodfish's house, and there he set his traps. Once he narrowly escaped losing his own life. Seeing a large wolf in his trap, he incautiously approached with a rotten pine pole in his hand. He struck and the pole broke in his hand, and the enraged beast spring at him with the trap and broken chain attached to his leg. Mr. Bodfish stepped suddenly to one side, and the wolf passed by him. Before the wold could recover, Mr. Bodfish was beyond his reach. This trap is preserved in his family as an heir-loom.
Joseph was born on 3 April 1651 at Sandwich, Barnstable County, Massachusetts.1,2 He was the son of Robert Bodfish (botfish) and Bridget NN----. He married Elizabeth Besse in June 1674 at Barnstable, Barnstable, Massachusetts.3,4 Joseph died on 2 December 1744 at West Barnstable, Barnstable County, Massachusetts, at age 93.5

Bertrade deLaon "au Grand Pied" ("Broad Foot") was born circa 720.6 She was the daughter of Caribert Count of deLaon and Bertrade. She married Pepin III "The Short" King of the Franks circa 740.7,8 Bertrade died in 783.7 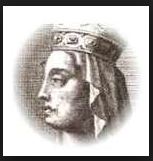 Rotrude of Hesbaye was the daughter of Lambert Count of Hesbaye.


Siser of a Wido, identified without proof by the Abb`e Chaume as son of St. Li'evin, Bishop of Tre`ves.

Children of Rotrude of Hesbaye and Charles Martel "The Hammer"

Child of Lambert Count of Hesbaye

Chrodbert Count palatine of Chlothar III was the son of Lambert of Hesbaye.1 He married Theodrade.3 died after 678.1

She married Chrodbert Count palatine of Chlothar III.2 was born.1

He married an unknown person . John died. John was born at Saxlingham, England.1

Henry Tuthill, of Tharston, England, and Hingham, MA, m. in England, Bridget ____, who came with him to America, survived him, and m. 2nd, William Wells, of Southold. "Lincoln's History of Hingham" says Henry Tuthill had a planting lot at Broad Cove in 1635, and a house lot in 1637. "Cushing's MSS. states that Henry Tuthill and his wife came from Norfolkshire, and settled in New Hingham in 1637. Henry was Freeman in March, 1638, and Constable in 1640. He sold his lot in Hingham 20 June 1644 and doubtless came to Southold. "Savage" states that both Henry and Bridget died before 1650.

Henry was born before 28 June 1612 (chr. dat at Tharston, county Norfolk, England. He was christened on 28 June 1612 at Tharston, county Norfolk, England.1,2 He was the son of Henry Tuthill and Alice Gooch. He married Bridget NN---- circa 1634 at Norfolkshire, England.3 Henry Tuthill was present at Daniel Tuthill's christening on 30 August 1640 at Hingham, Plymouth County, Massachusetts.4 Henry died before 1650 at Southold, Long Island, Suffolk County, New York.5,2

John was a large landowner at Southold. The dates of the girth of his children are recorded in his Bible, and in Liber E., MSS. Town Records.