Hildegrade was born in 758.5 She was the daughter of Gerold I Count of Vinzgau and Emma of Allemannia. She married Charlemagne "Charles the Great" Frankish Emperor of the West circa 771 at Aachen.6 Hildegrade Countess of Vinzgau was present at Pepin King of Italy's christening on 12 April 777 at Rome, Italy.7 Hildegrade died on 30 April 783.6 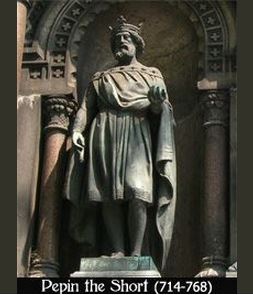 Pepin the "Short"
Pepin the Short, King of the Franks


Pepin, also known as Pepin III, c.714-68, was the first Carolingian king of the Franks (Rex Francorum ) and the father of CHARLEMAGNE. Pepin and his brother Carloman succeeded (741) their father, CHARLES MARTEL, as mayors of the palace; during the next six years they crushed a half dozen serious revolts in Bavaria, Alamannia, Saxony, and Aquitaine. With the realm at peace Carloman entered a monastery (747). Three years later Pepin altered the long-standing pro- Lombard policy of his family and arranged with Pope Zacharias to support the papacy in return for papal sanction of Carolingian usurpation of the Frankish kingship. Thus Pepin deposed (751) King Childeric III and was anointed king of the Franks. To preserve his bond with the papacy, Pepin crushed the Lombards when they threatened Rome (754, 756). He ceded conquered territories to the pope (the Donation of Pepin), thus establishing the basis for the PAPAL STATES. Pepin also crushed revolts in Saxony (748, 753) and Bavaria (749) and conquered Aquitaine. He was succeeded by his sons, Charlemagne and Carloman.


Pepin III "The Short" King of the Franks was Crowned at King of the Franks, Austrasia. was born circa 715 at Austrasia.4 He was the son of Charles Martel "The Hammer" and Rotrude of Hesbaye. He married Bertrade deLaon "au Grand Pied" ("Broad Foot") circa 740.4,5 died on 24 September 768 at St. Denis, France.4

Although Louis I, "Louis the Pious" born 778, died June 20, 840, was an able ruler and energetic military commander, his reputation has suffered because he was not as successful as his father, CHARLEMAGNE. Louis was crowned king of Aquitaine at the age of three. In this capacity, after reaching his majority, he established a vigorous Carolingian presence in Spain. His brothers having died, he was crowned co emperor in 813, and in 814 he succeeded Charlemagne as sole ruler of the Frankish empire. Louis sought to develop the imperial ideal, working closely with the church. However, squabbles among his sons for greater shares in what was to be their inheritance led to civil war. In 817, Louis made his eldest son, LOTHAIR I, co emperor and allocated parts of the empire to his other sons, LOUIS THE GERMAN and Pepin. The birth of another son, the future Emperor CHARLES II, to Louis's second wife, Judith of Bavaria, started the trouble. Louis's attempts to provide for Charles precipitated a series of revolts by the older sons. The invasions of Vikings and Muslims further weakened Carolingian power. By the time of Louis's death the empire was in serious decline.

Children of Louis I Frankish Emperor and (?) Ermengarde

Children of Louis I Frankish Emperor and Judit of Bavaria

Judit of Bavaria was the daughter of Welf Count of Bavaria. She married Louis I Frankish Emperor in 819.1 Judit died on 19 April 843.1

Children of Judit of Bavaria and Louis I Frankish Emperor

Charles II Emperor of the West

Charles II, Frankish Emperor or "Charles the Bald", born June 13, 823, died Oct. 6, 877, was the son of Emperor LOUIS I by his second wife. Resented by three older half brothers, Charles became a pawn in the court politics of the Frankish empire, but by the Treaty of Verdun (843) he was recognized as king of the West Franks, the first true king of France. Toward the end of his life he was acknowledged (875) as emperor with the pope's support. Throughout his reign, Charles had to struggle against Viking raiders and disloyal magnates as well as with his own relatives. The French bishops helped him repel his brother LOUIS THE GERMAN in 859, but ten years later Louis prevented Charles from regaining his family's ancient homeland in LOTHARINGIA. The Treaty of Mersen (870), which established the ultimate boundaries of medieval France, deprived him of most of this disputed territory, and by his death the French monarchy was in serious decline.

Child of Charles II Emperor of the West

Ermentrude of Orleans was the daughter of Odo Count of Orleans. She married Charles II Emperor of the West on 14 December 842.1 Ermentrude died on 6 October 869.1

was born circa 846.1,2 She was the daughter of Charles II Emperor of the West and Ermentrude of Orleans. She married Baldwin I "Bras deFer" in 862.1,2

Child of Judith of France and Baldwin I "Bras deFer"

Child of Baldwin I "Bras deFer" and Judith of France

M
He married an unknown person . Henry was born.1 He was the son of Rynold or Reginald de Wynterwade.

M
He married an unknown person . Richard was born.1 He was the son of Henry De Wyntword.

M, b. 7 April 1726
Thomas was born on 7 April 1726 at Wethersfield, Connecticut.1 He was the son of Thomas Goodrich and Hannah Reynolds.

F, b. circa 1731
Freelove was born circa 1731 at Wethersfield, Connecticut.1 She was the daughter of Thomas Goodrich and Hannah Reynolds.

M, b. circa 1734
Jerusha was born circa 1734 at Wethersfield, Connecticut.1 He was the son of Thomas Goodrich and Hannah Reynolds.


John Josselyn is first of record at Fyfield, where he lived for a year and a half, at least, after his marriage. Between 16 June 1546, when he is taxed at Fyfield, and 20 Apr. 1547, when he is taxed at Chignal-Smealy, he moved to the latter parish, six miles noreast from Fyfield, although one of his children was later baptized in the latter place, probably having been born there while her mother was visiting relatives. At some time between 1551 and 1561 he moved to Roxwell, which lies between Fyfield and Chignal-smealy, and there he lived the rest of his life. A glance at the map of Essex shows how close to the old ancestral seats of the family this branch of it remained. Fyfield is six mile from Great Canfield, seven miles from Newhall Josselyn in High Roding ( both parishes being in co. Essex), five miles from Hide Hall in Sawbridgeworth, co. Herts, and two miles from Torrell's Hall, anciently called Shellow-Josselyn, in Willingale-Doe, co. Essex. Roxwell is six miles from Newhall Josselyn, ten miles from Hide Hall, two miles from Torrell's Hall, seven miles from Great Canfield, and five miles from Fyfield. By a fine dated 1 and 18 May 1573 John Josselyn required of William Water the property called Bollinghatch in Newland hamlet in the parish of Roxwell, consisting of a house, garden, orchard, one hundred and forty acres of land, ten acres of meadow, ten acres of pasture, and ten acres of wood. This property, now called Boldinghatch, lies about half a mile from Good Easter, co. Essex, where in the next generation a kinsman of John Josselyn, Rev. Jeffrey Josselyn, held the living for fifty years. John Josselyn held Bollinghatch of the manor of Newland Hall, the lord of the manor, Edward Elliot, being a connection by marriage, his daughter Elizabeth having married Thomas Young, third cousin of John Josselyn. At the time of his death John Josselyn also held of the Queen a house and land called Searles in Roxwell, with other land in Roxwell held of the manor of Fambridge End and land Called Thistledowns in Shellow-Bowels and Willingale-Doe held of Henry Josselyn as of his manor of Torrell's Hall. NEHGR vol 71 pg 246-47.

Thomas King immigrated to New England from Ipswich "in the Elizabeth of Ipswich, Master, William Andrews, the last of April 1634", at the age of 15 with the family of John Barnard. He went first to Watertown and some three years later moved to the new settlement at Sudbury. He was one of the thirteen petitioners in 1656 for the Whipsuppenicke Plantation, which was incorporated as "Marlborow" on May 31, 1660, when he was choser one of the seven members of the first board of selectmen of which Edmund Rice was the chairman.

He married Bridget Loker.1 Thomas was born circa 1600 at Sheston Purbeck, county Dorset, England.2,3 He married Anne Collins circa 1626.2,3 Thomas immigrated to (an unknown value) in 1634. Thomas died circa 1676 at Marlborough, Massachusetts.

F
Ann was born.1 She was the daughter of Thomas King and Anne Collins.

F
Mary died. Mary was born.1 She was the daughter of Thomas King and Anne Collins.

Helenora was born between 1 February 1545 and 1546 at Fyfield, co. Essex, England.1 She was the daughter of John Josselyn and Alice Nevell.

He was a yeoman. Thomas was born circa 1548 at Fyfield, co. Essex, England.1 He was the son of John Josselyn and Alice Nevell.

Richard was born circa 1552 at Chignal-Smealy, county Essex, England.1 He was the son of John Josselyn and Alice Nevell.