Child of Rosela of Ivrea and Arnulf II Count of Flanders

Frederick I Count of Luxembourg

Child of Frederick I Count of Luxembourg

Child of Hermann Billung [Duke of Saxony] and Hildegarde NN----

She married Hermann Billung [Duke of Saxony]. Hildegarde died. She resided, at Westerbourg.1

Child of Hildegarde NN---- and Hermann Billung [Duke of Saxony]

Arnulf I Count of Flanders1

Child of Arnulf I Count of Flanders and Adela de Vermandois

Child of Adela de Vermandois and Arnulf I Count of Flanders

Child of Baldwin II Count of Flanders and (?) Alfthryth

Child of (?) Alfthryth and Baldwin II Count of Flanders

Robert I Duke of Normandy1

Conan I Duke of Brittany1

Conan I Duke of Brittany was the son of Juhal Berenger Count of Rinnes and Gerberg.
of Rennes.

Child of Conan I Duke of Brittany and Ermengarde of Anjou

She married Geoffrey I "Grisgonelle" Count of Anjou.1 Adelaide was born in 950.2,3 She was the daughter of Robert Count of Troyes and Meau and Adelaide. Adelaide died circa 975.4

Geoffrey I "Grisgonelle" Count of Anjou

He married Adelaide de Vermandois.1 was born.2 He was the son of Faulk II Count of Anjou and Gerberge. died on 21 July 987.3

Alfred "The Great" King of England 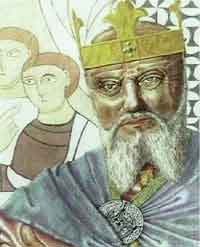 Alfred, b. 849, d. Oct. 26, 899, succeeded his brother AEthelred as king of WESSEX in April 871. Both he and his brother were sons of King AEthelwulf. The only English king called "the Great," Alfred is renowned both for his ability as a war leader and for his love of learning. He can be counted, with CHARLEMAGNE , as one of the two most outstanding rulers of the 9th century. Alfred was the first English monarch to plan systematically for the defense of his realm against the Danes, with whom he was almost constantly at war from 876 until the end of his life. He was also the first monarch of an English kingdom to become a symbol and focus of national unity. Although effective ruler only of Wessex and English Merica he was regarded as the protector of all the English living under Danish rule. His capture of London in 886, which marked the farthest extent of his essentially defensive territorial expansion, led to general English recognition of his leadership. After his death, however, Wessex and Mercia were still unable to expel the Danes from England. A learned layman, Alfred tried to ensure that his countrymen had the opportunity to become literate. To that end, he relied upon the bishops of the Anglo-Saxon church both to teach and to seek out students. Alfred himself translated into Anglo-Saxon the Pastoral Care of
Pope Gregory I, Orosius' Seven Books of History against the Pagans, Boethius' Consolation of Philosophy, (possibly) the Ecclesiastical History of the Venerable Bede, and part of St. Augustine of Hippo's Soliloquies. To each of these except the fourth he added his own commentary. Alfred's military victories saved English culture and national identity from destruction, and his intellectual activities began the education of his people in the Latin heritage.

He married Anne Stafford. Richard was born in 1468. He was the son of Henry (Sir) Neville and Joanna Bourchier. Richard died in 1530.

M
He married an unknown person . Michael was born.1 He was the son of Richard De Wentworth.

Henry (Sir) Neville was the son of George (Sir) Neville and Elizabeth Beauchamp. He married Joanna Bourchier. Henry died in 1469.

M
He married an unknown person . Henry was born.1 He was the son of Michael De Wentworth.

Joan Beaufort was the daughter of John of Gaunt. Joan Beaufort married Sir Robert deFerrers on 27 September 1369 at Lic.1 She married Ralph de Neville before 3 February 1396.2 Joan died on 13 November 1440 at Howden.1