Agnes Of Poitou was the daughter of William VII of Poitou and IX of Aquitaine and Philippa or (Mathilda) of Toulouse. Agnes died. She married Aumauri of Thouars before 1134.1 She married (?) Ramiro II "The Monk" King of Aragon before 1135.1

Child of Agnes Of Poitou and (?) Ramiro II "The Monk" King of Aragon

(?) Ramiro II "The Monk" King of Aragon was the son of Sancho Ramirez I King of Aragon & Navarre and Félice. He married Agnes Of Poitou before 1135.1 (?) died.1

Child of (?) Ramiro II "The Monk" King of Aragon and Agnes Of Poitou

Child of Sancho Ramirez I King of Aragon & Navarre and Félice

Félice was the daughter of Hildouin III Count of Montdidier and Alix de Roucy. She married Sancho Ramirez I King of Aragon & Navarre.1 Félice died.1

Child of Félice and Sancho Ramirez I King of Aragon & Navarre 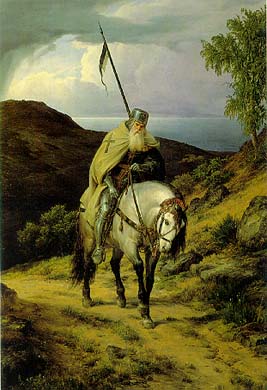 Crusader 1147, was in England in 1178. He married Elizabeth de Courtenay.1 was born.1 He was the son of Louis VI "the Fat" King of France (Crusader) and Adelaide of Savoy. died at Acre, Palestine.1

Child of Peter of France (Crusader) and Elizabeth de Courtenay

Child of Elizabeth de Courtenay and Peter of France (Crusader) 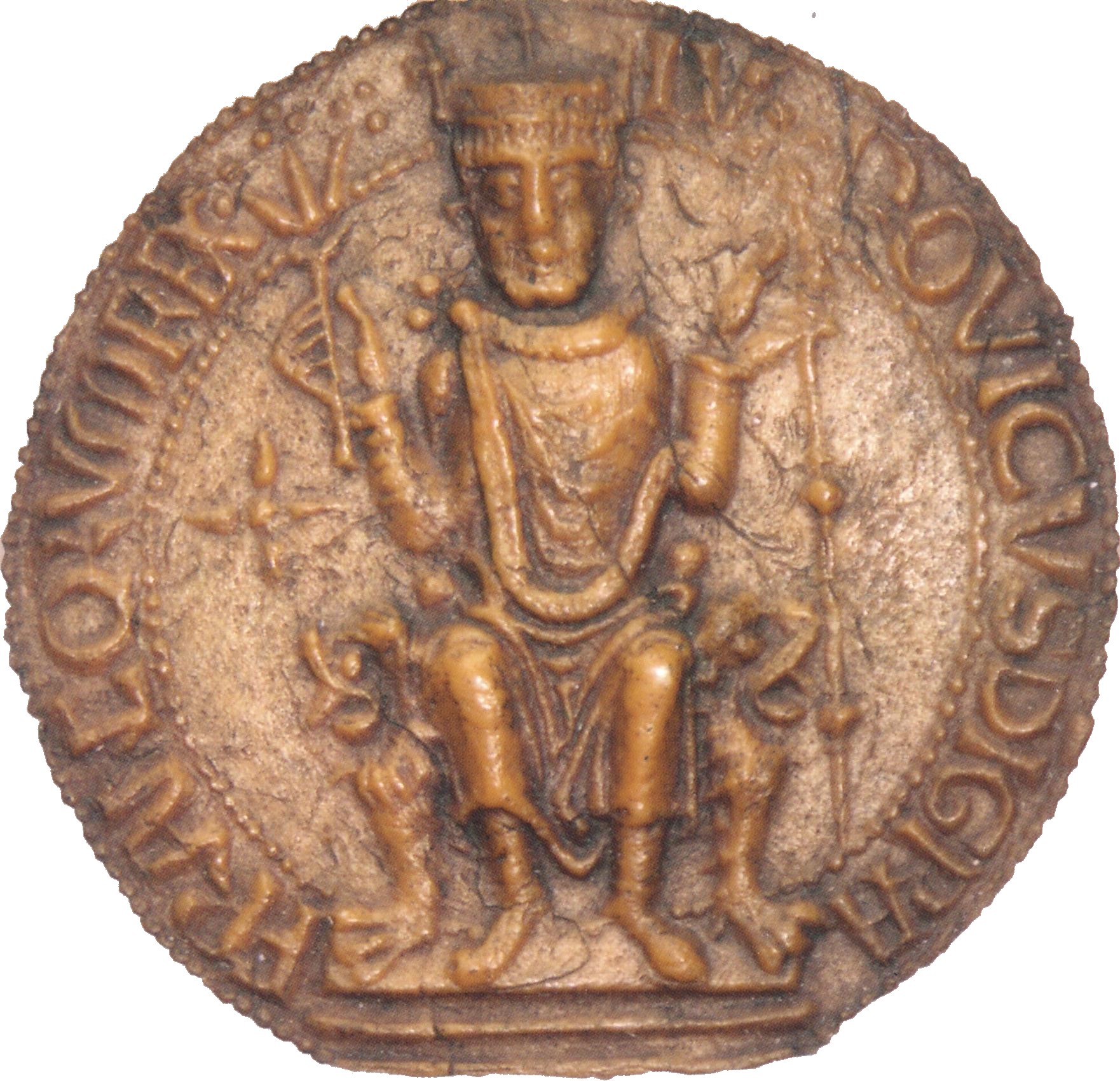 Adelaide of Savoy married Louis VI "the Fat" King of France (Crusader), son of Philip I King of France, Count of Paris and Bertha of Holland, in 1115 at 2nd, Paris.1 Adelaide died. 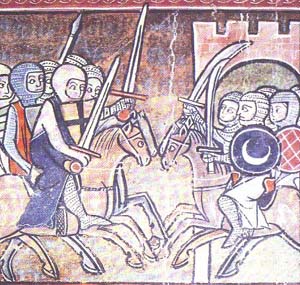 was born in 1092.1 He was the son of Fulk IV "Rechin" Count of Anjou and (?) Bertrade or Beatrice. It is true that "the father will not bear the iniquity of the son nor the son of the father". Thus it is that after the death of Fulk Rechin, his son Fulk V, count of Anjou, abandoned the ways of his mother and father and led an honourable life, ruling his territory wisely. He negotiated with Elias count of Maine in order to marry the latter's only daughter, the girl whom Martel had been going to wed, and with her hand to acquire the county of Maine. It was in this way that the counties of Maine and Anjou were recognized as united.

Fulk V was an upright and bigorous man of orthodox faith who was benevolent towards the men of God.

In the year of our Lord 1110, Fulk V had a son Geoffrey by his wife the daughter of Count Elias. the boy grew into an oustanding soldier and espoused Matilda, daughter of Henry I, king of the English and widow of the German emperor Henry V. By the same wife, Fulk had another son called Elias.

Fulk of Jerusalem
From Wikipedia, the free encyclopedia.

Fulk of Anjou, king of Jerusalem (1092-1143), was the son of Fulk IV, count of Anjou, and his wife Bertrada (who ultimately deserted her husband and became the mistress of Philip I of France).

He became count of Anjou (as Fulk V) in 1109. He was originally an opponent of Henry I of England and a supporter of Louis VI of France, but in 1127 he allied with Henry when Henry arranged for his daughter Matilda to marry Fulk's son Geoffrey Plantagenet.

Fulk visited the Holy Land in 1120, and become a close friend of the Templars. After his return he began to subsidize the Templars and also maintained two knights in the Holy Land for a year. In 1128 he was preparing to return to the East when he received an embassy from King Baldwin II of Jerusalem who had no male heir to succeed him. Baldwin arranged for Fulk to marry his daughter Melisende, which would allow Fulk to succeed Baldwin as king. Fulk accepted the offer and in 1129 he and Melisende were married, with the towns of Acre and Tyre as her dowry.

In 1131 Fulk became king of Jerusalem when Baldwin II died. The kingdom under Fulk was prosperous, and at the beginning of his reign he also acted as regent of the Principality of Antioch. As regent he had Raymund of Poitou marry the infant Constance of Antioch, daughter of Bohemund II. However, the greatest concern during Fulk's reign was the rise of atabeg Zengi of Mosul.

In 1137 Fulk was defeated near Barin. Fulk then allied with the vizier of Damascus, who was also threatened by Zengi, and was able to capture the fort of Banias, to the north of Lake Tiberias. Fulk also strengthened the kingdom to the south. His butler Paganus built the fortress of Kerak to the south of the Dead Sea, and to help give the kingdom access to the Red Sea, Fulk had Blanche Garde and other forts built in the south-west to overpower the Egyptian fortress at Ascalon.

In 1137 and 1142, Byzantine emperor John II Comnenus arrived in Syria attempting to impose Byzantine control over the Crusader States. John's arrival was ignored by Fulk, who declined an invitation to meet John in Jerusalem. Fulk died in 1143, leaving two sons who both became kings, as Baldwin III and Amalric I.

William of Tyre described Fulk as a capable soldier and politician, who defended both the kingdom and the church, reflecting the policies of his predecessors Baldwin I and Baldwin II. William felt that the major fault of Fulk's reign was his inattention to the defense of the states to the north against the invasions of Zengi, which culminated in the fall of the County of Edessa in 1143.2

He married Erembourg in 1110.1 He married Melisende de Rethel on 2 June 1129.1 Faulk V, King of Jerusalem
In 1128 a delegation from Baldwin II, King of Jerusalem, arrived in France. The king had no son to succeed him as defender of the Holy Sepulchre, only four daughters. His messenger requested Louis VII to select from the French nobility a man suitable to marry Baldwin's eldest daughter Melisande, and in due course to succeed as king of Jerusalem.

Louis's choice was Fulk, count of Anjou, Maine and Touraine, who accordingly travelled t the East to marry in 1129.

Jerusalem was one of four Christian states that had been established in Syria some 30 years earlier, in the aftermath of the First Crusade, a giant armed pilgrimage which had resembled a vast raid, since few of the great concourse of princes, knights and humbler folk who made the journey settled in the East.

In 1096 a multidude had answered Pope Urban's call to arms in defence of Christianity. Yet although he had preached in Angers itself the rulers of the Angevins had been unmoved. Why, then, was Faulk chosen to be king of Jerusalem, and why was he prpared to quit the native land he had laboured hard to expand and consolidate?

In 1128 the count of Anjou was about 40 and had already made a pilgrimage to Jerusalem. An eye-witness Archbishop William of Tyre, described him as "...a ruddy man, like David...faithful and gentle, affable and kind...a powerful prince...and very successful in ruling his own people...an experienced warrior full of patience and wisdom in military affairs." His main fault was an appallingly bad memory for names and faces.

The offer of a crown was too good an opportunity to be missed by a mere count, and as Archbishop William indicated, Fulk possessed all the qualifications required for the job. In addition, as a wwidower he was free to marry again, and could resign his lands confident that they were in reliable hands: his youthful but able son Geoffrey Plantagenet was knighted and betrothed to Matilda, the daughter and heiress of Henry I of England-in time he too stood to inherit a kingdom.

All inall 1128 was a good year for the house of Anjou and its spectacular advance had been achieved by astute marriages rather than by war.

Crossing the sea in 1129 with a large force, Fulk consummated his marriage wth the king's daughter and became king of Jerusalem in 1129.

After King Baldwin died, Fulk V ruled the kingdom manfully. He made the inhabitants of Damascus and Ascalon pay tribute and long before Raymond, brother of the count of Poitou, married the daughter of Bohemond of Antioch, Fulk sustained the principality of Antioch against the Turks with great effort, losing nothing. By his wife, he had two sons, Baldwin and Amaury. He himself lived to a great age and died still combative. The men of Jerusalem made Baldiwn king after him.3

Child of Fulk V "The Young" Count of Anjou and Erembourg

Erembourg was the daughter of Helias Count of Maine. She married Fulk V "The Young" Count of Anjou in 1110.1 died.1

Child of Erembourg and Fulk V "The Young" Count of Anjou

Child of Helias Count of Maine

was born.1 He was the son of Aubri-Geoffrey Count of the Gatinais and Ermengarde of Anjou. He married (?) Bertrade or Beatrice between 1090 and 1091.1 died.1

Child of Fulk IV "Rechin" Count of Anjou and (?) Bertrade or Beatrice

Child of (?) Bertrade or Beatrice and Fulk IV "Rechin" Count of Anjou

(?) Simon I Seigneur of Montfort I`Amauri1

Child of (?) Simon I Seigneur of Montfort I`Amauri and Agnes d`Évreux

Agnes died. She married (?) Simon I Seigneur of Montfort I`Amauri.1

Child of Agnes d`Évreux and (?) Simon I Seigneur of Montfort I`Amauri

Child of Fulk III "The Black" Count of Anjou and Hildegarde

She married Fulk III "The Black" Count of Anjou after 1000.1 Hildegarde died.1

Child of Hildegarde and Fulk III "The Black" Count of Anjou

Aubri-Geoffrey Count of the Gatinais was the son of Geoffrey III Count of Gatinais and Beatrix of Macon. He married Ermengarde of Anjou circa 1035.1 Aubri-Geoffrey died.

Geoffrey III Count of Gatinais was the son of Fulk II "The Good" Count of Anjou and (?) Gerberga (of the Gatinais?) died. He married Beatrix of Macon.1

Child of Geoffrey III Count of Gatinais and Beatrix of Macon

Child of Beatrix of Macon and Geoffrey III Count of Gatinais

Child of Fulk II "The Good" Count of Anjou and (?) Gerberga (of the Gatinais?)

Child of (?) Gerberga (of the Gatinais?) and Fulk II "The Good" Count of Anjou