She married Thomas (Sir) Battell.3 Elizabeth died. She was the daughter of Sir Richard de Enfeild and NN---- Nortoft. Elizabeth was born.3

Richard died. Richard was born.3 He was the son of John Enfeild Sr. and Isabell Bigott. He married NN---- Nortoft.

Ralph Jocelyn was the son of Henry Jocelyn and Jane Chastelin. (Harleian MS. 4944, in the British Museum)
3 John (1201-02) - Agreement between Ralph Jocelin, plaintiff, and Adam de Eston, tenant, of land in eston, county Northamptonshire [Fines of the Bench].

4 John(1202-03) - Agreement between Abraham the son of Ralph, plaintiff, and Ralph Jocelin and Beatrice his wife, tenants of land in Eston, Northamptonshire [Fines of 4 John].

He married Beatrice NN----.1 He resided, in 1201.1 Ralph died at Northamptonshire, England.

Henry was born.1 He was the son of James Jocelyn and Joan Threckenholm. He married Jane Chastelin.1

She married Henry Jocelyn.1 Jane was born.1 She was the daughter of William Chastelin and Joan Sulliard.

James Jocelyn was the son of Robert Jocelyn and NN---- Fleming. He resided, at county Essex, England.1 He married Joan Threckenholm.1

She married James Jocelyn.1 Joan was born.1 She was the daughter of Henry Throckingholden.

He married NN---- Fleming.1 Robert was born in 1129.2,3 He was the son of William Jocelyn and Oswalda Goushall.

She married Robert Jocelyn.1 NN---- died. She was the daughter of John Fleming. NN---- was born.2

He married Oswalda Goushall.1 William was born circa 1107.2,3 He was the son of Geoffrey Jocelyn. 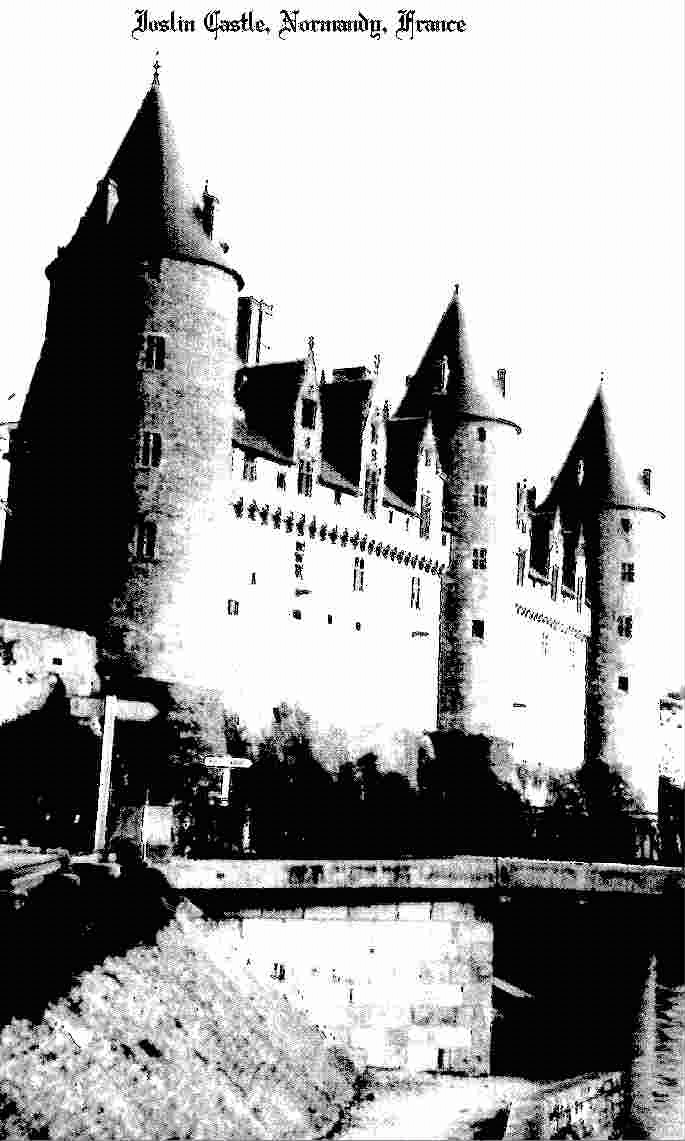 
Sir Gilbert, a wealthy Norman knight, was sent to France to acquire an education, and who returned to England, it is said, with the Conqueror in 1066. Married the daughter of a Saxon thane. To this son descended the vast landed possessions of his father in Lincolnshire and adjoing counties. Here he held Gilbert of Gaunt the lordships of Semperingham and Tyrrington.

Children of Sir Gilbert or Galfridus Jocelinus and NN---- NN----

Grace was born.1,2,3 John de Sudeley, son and heir. In 1130 he accounted under Gloucs. for 10 mks. of silver for a plea of his wife. He m. Grace da. of William de Tracy, a natural son of King Henry I. John died probably late in the reign of Henry I.

She was the daughter of William De Tracy. She married John (Lord) de Sudeley circa 1130.4,5

William de Tracy, bye-blow of King Henry I of England. Almost certainly being younger than his half brother Robert de Caen, Earl of Gloucester, died soon after his father; granted during his father's lifetime the escheated estates of William Capra in Devonshire including the barony of Bradninch, Devon.

Henry I King of England1,2 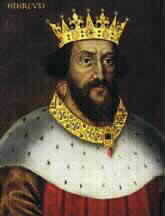 Henry I, King of England

Henry I, born circa 1068, one of the greatest kings of England, ascended the throne on August 5, 1100, and ruled until his death on December 1, 1135. The third son of William I, he succeeded his oldest brother, William II, who died under suspicious circumstances while hunting with Henry. Henry's older brother Robert I (c.1054-1134), duke of Normandy, invaded (1101) England but was forced to recognize Henry as king. Subsequently, Henry seized (1106) Normandy as well.

In his coronation charter (1100) Henry promised to remedy the alleged misrule of William II; this document was the first English royal charter of liberties, the ancestor of Magna Carta (1215). The king exploited his resources as feudal suzerain; yet in his reign occurred the beginning of the transformation of feudalism by the commutation of personal to financial service. The creation of the office of justiciar and of the royal exchequer also constituted the first appearance of specialization in English government. Royal justice was brought to the local level by itinerant judges, and royal control over the kingdom was strengthened. Although many barons objected to the severity of his rule, Henry gave peace, security, and stability to his country. He quarreled with the church over the lay investiture of clergy, forcing the archbishop of Canterbury, Saint Anselm, into exile for a time. This issue was settled (1107), however, by a compromise that served as the pattern for later resolution of the Investiture Controversy in Europe. During Henry's reign England participated increasingly in Continental intellectual life. His was also the first post-Conquest reign noted for patronage of learning and of secular officials.
was born circa 1070 at Selby, England.3,4,5,6,7 He was the son of William I "The Conqueror" King of England and Maud (Matilda) of Flanders. He was crowned King at England in 1100 by (an unknown value).1 He married Matilda of Scotland on 11 November 1100.8 He married Adeliza of Louvain between 29 January 1121 and 1122.8 died on 1 December 1135 at Buried in Reading, England.

Child of Henry I King of England and Sybil Corbet [Mistress]

Child of Henry I King of England and Mistress NN----

Child of Henry I King of England

Child of Henry I King of England and Matilda of Scotland

William I "The Conqueror" King of England 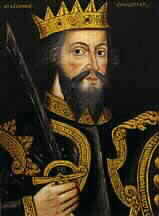 William was born circa 1027 at Falaise Castle, Falaise, France.1,2,3 He was the son of Robert I Duke of Normandy and Herleve of de Falasie.
William I, King of England, William the Conqueror

William Duke of Normandy and one of the greatest English kings, William I, born circa 1027, died Sept. 9, 1087, led the Norman conquest of England and provided stability and firm government in an age of great disorder. The illegitimate son of the Norman duke Robert I, he inherited Normandy in 1035, consolidating his rule in the face of baronial opposition in about 1042. He successfully faced further rebellions and after 1050 began to take an interest in acquiring land in England--perhaps given some encouragement by the English king Edward the Confessor. After Edward's death (Jan. 5, 1066), Vikings under King Harold III of Norway moved on England, and William soon followed with an invasion force of his own. The new English king, Harold II, defeated the Vikings and confronted the Normans near Hastings in October 1066. William's forces achieved a decisive victory, and on Christmas Day 1066, William was crowned King of England, founding the Anglo-Norman monarchy and realm. A highly capable, intelligent, and determined man, William I established a strongly personal monarchy. He imposed Norman institutions and personnel both on the state and on the church, and he brought England into the mainstream of continental development. Imposing royal authority directly on courts and other institutions, William ordered the inquests that resulted in the monumental DOMESDAY BOOK. He revolutionized the social, political, and military structures of England, replacing the English nobility with French nobles, thus strengthening his authority, and introducing continental FEUDALISM, a structure in which nobles held land in return for service in the royal army. As the Anglo-Saxon state was Normanized, so too was the English Church: English bishops and abbots were replaced by noted churchmen from the Continent, including LANFRANC of Bec, who became (1070) archbishop of Canterbury. The Conqueror had been a great reformer of the church in Normandy, and he continued this role in England. He established the archbishop of Canterbury as primate of the English church, held reforming councils (which he attended), and exercised not only his rights but also his responsibilities over the church. The bishops were among his closest advisors and officials. William I kept a close but cool relationship with the papacy, supporting ecclesiastical reform while carefully maintaining his control over the English church. He was succeeded as duke of Normandy by his eldest son, Robert II, and as king of England by his sons, first William II, then Henry I.

Here is set down what William, king of the English, established
in consultation with his magnates after the conquest of England:

1. First that above all things he wishes one God to be revered
throughout his whole realm, one faith in Christ to be kept ever
inviolate, and peace and security to be preserved between
English and Normans.

2. We decree also that every freeman shall affirm by oath and compact that he will be loyal to king William both within and without
England, that he will preserve with him his lands and honor with all
fidelity and defend him against his enemies.

3. I will, moreover, that all the men I have brought with me, or who
have come after me, shall be protected by my peace and shall dwell
in quiet. And if any one of them shall be slain, let the lord of his
murderer seize him within five days, if he can; but if he cannot,
let him pay me 46 marks of silver so long as his substance avails.
And when his substance is exhausted, let the whole hundred in which
the murder took place pay what remains in common.

4. And let every Frenchman who, in the time of king Edward, my kinsman, was a sharer in the customs of the English, pay what they call "scot and lot", according to the laws of the English. This decree
was ordained in the city of Gloucester.

5. We forbid also that any live cattle shall be bought or sold for
money except within cities, and this shall be done before three
faithful witnesses; nor even anything old without surety and warrant.
But if anyone shall do otherwise, let him pay once, and afterwards
a second time for a fine.

6. It was decreed there that if a Frenchman shall charge an Englishman with perjury or murder or theft or homicide or "ran", as the English call open rapine which cannot be denied, the Englishman may defend himself, as he shall prefer, either by the ordeal of hot iron or by
wager of battle. But if the Englishman be infirm, let him find another
who will take his place. If one of them shall be vanquished, he shall
pay a fine of 40 shillings to the king. If an Englishman shall charge
a Frenchman and be unwilling to prove his accusation either by ordeal
or by wager of battle, I will, nevertheless, that the Frenchman shall
acquit himself by a valid oath.

7. This also I command and will, that all shall have and hold the law of the king Edward in respect of their lands and all their posessions,
with the addition of those decrees I have ordained for the welfare of
the English people.

8. Every man who wishes to be considered a freeman shall be in pledge so that his surety shall hold him and hand him over to justice if he shall offend in any way. And if any such shall escape, let his sureties see to it that they pay forthwith what is charge against him, and let them clear themselves of any complicity in his escape. Let recourse be had to the hundred and shire courts as our predecessors decreed. And those who ought of right to come and are unwilling to appear, shall be summoned once; and if for the second time they refuse to come, one ox shall be taken from them, and they shall be summoned a third time. And if they do not come the third time, a second ox shall be taken from them. But if they do not come the fourth summons, the man who is unwilling to come shall forfeit from his goods the amount of the charge against him --
"ceapgeld" as it is called -- and in addition to this a fine to the king.

9. I prohibit the sale of any man by another outside the country on pain of a fine to be paid in full to me.

10. I also forbid that anyone shall be slain or hanged for any fault,
but let his eyes be put out and let him be castrated. And this command
shall not be violated under pain of a fine in full to me.

Baldwin IV, the Bearded, made Count of Valciennes in 1007 and was also Count of Flanders.

Child of Baldwin IV Count of Valenciennes and Otgive of Luxemburg

Child of Otgive of Luxemburg and Baldwin IV Count of Valenciennes

Child of Arnulf II Count of Flanders and Rosela of Ivrea