She married Ralph Jocelyn.1 Margaret was born.1 She was the daughter of John De Patmer.

He resided, at Patmer Hall, England.1 Philip was born.1 He married NN---- Bawde.1

He resided, at Somerby, county Lincolnshire, England.1 John was born.1

Thomas Jocelyn was the son of Ralph Jocelyn and Margaret De Patmer.


Thomas granted in 1407 Hide Hall to his brother Jeffrey (Jarleian MS. 4944, in the British Museum).

Jeffrey Jocelyn, of Hide Hall in Sawbridgeworth, co. Herts, and of the manor of Shellow-Bowels or Shellow-Jocelyn in Willingale-Doe, co. Essex. On 28 Dec. 1338 he leaased the manor of Shellow-Jocelyn to Robert le Marshall of Northweld and Margery his wife during their lives, subject to a rent charge of 6lbs. a year during the life of his (Jeffrey's) mother. This manor passed out of the Josselyn family into the possession of the Torrell family, being called Torrell's Hall or Shellow-Torrell; but came again into the possession of the Josselyns some two hundred years later. (vide infra, 23.)

He married Margaret Rokell.1 Geoffrey was born circa 1319. He was the son of Ralph Jocelyn and Maud de Sutton. Geoffrey died circa 1373 at Hide Hall, Sawbridgeworth, county Herts, England.1

She married Geoffrey Jocelyn.1 Margaret was born.1 She was the daughter of Robert Rokell.

Ralph Jocelyn succeeded his brother Thomas about 1284, and had livery of his father's lands in Oct. 1297 (Calendar of Fine rolls, vol.1 pg 392), having proved his age. In his depositon on this occassion Ralph deMerk of Roothing, co. Essex, aged forty years, stated that Ralph Jocelyn, son of Thomas, was twenty-one years of age on the Feast of St. Lucy the Virgin previous, that he was born at Shellow and was baptized in the parish church of Willingale-Doe on the fouth day after his birth, and that he, the deponent, held him at the font and gave him his name.

He married Anne Sandys.1 He married Maud de Sutton.1 Ralph was born on 13 December 1275 at Shellow-Bowels, county Essex, England.2,3 He was the son of Thomas Jocelyn and Alice Liston. Ralph died before 1323.1

She married Ralph Jocelyn.1 She married Roger De Berners.1 Maud was born circa 1303.2 She was the daughter of Sir John Sutton and Margaret de Somery. Maud died in 1354.3

John was born.2 Sir John de Sutton, Knight, who married Margaret daughter of Roger de Somerie, and elder sister and co-heir of John de Somerie, Lord dudley, by whom the Sutton family acquired the castle of Dudley, and other considerable estates. This Sir John Sutton pased away by deed, bearing date at Westminster, 19 October, in the 19th Edward II, all his right and title to the castle and manor Dudley, with other lands, to Hugh le Despenser, son of Hugh, Earl of Winchester. But the grant thus made being extorted from him while in prison, and in fear of being put to death, it was cancelled upon the accession of Edward III, and the property restored. 3 He was the son of Richard de Sutton and Isabel NN----. He married Margaret de Somery. John died circa 1326. 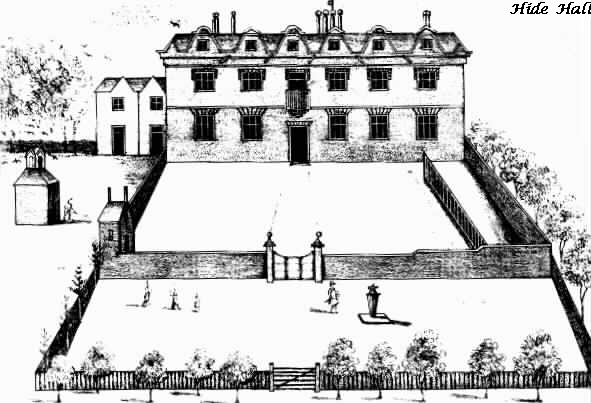 He was the son of Thomas Jocelyn and Maud Hide. Thomas died circa 1284.1

She married Thomas Jocelyn.2 Alice died. She was the daughter of William Liston. Alice was born.2

Thomas was born circa 1273 at Hide Hall, Sawbridgeworth, county Herts, England.1 He was the son of Thomas Jocelyn and Alice Liston.

By the marriage of Thomas Jocelyn with Maud Hide the manor of the Hide, or Hide Hall, as it was later called, passed into the possession of the Josselyn family, who held it for almost six hundred and fifty years, until, in 1897, it passed by will to Sophia, widow of the fifth Earl of Roden, a nobleman who had died without male issue. A charter of "Thomas son of John" is still preserved in the family.

Thomas was born circa 1220.1 He was the son of John Jocelyn and Katherine Battell. He married Maud Hide circa 1248.2 Thomas died after 1277/1278 at Sawbridgeworth, county Herts, England.2

Elizabeth was born circa 1195.1 She was the daughter of Ralph de Sudeley Lord of Sudeley and Isabel NN----. She married Sir John Hide circa 1215.1

Whatever his dispute with the crown was, he seems to have settled it, for five years later he was off on a missin for the king, probably to Ireland. 9 July, 14 Henry III (1230) - John Jocelin has letters of protection [safe conduct], valid for as long as he shall be in the service of the lord king beyond the seas (Cal. of Patent Rolls). 16 Henry III (1232) - Grant to prior and canons of Bradenestok of various gifts made to them...of the gift of John Jocelin, a virgate and messuage in Apeltre and 6 acres in the fields of Eston (Calendar of Charter Rolls).

These last two documents tell us little. He may have been long dead by 33 Henry III. 33 Henry III (1248-9) - Agreement between the Prior of Blakemore, plaintiff, and Herbert de Shelewes, tenant of 100 acres of land in Shelewes. And it is to be known that the aforesaid Herbert has given up to the aforesaid Prior all the charters and muniments which he had of the gift of John Jocelin, William de Springfield, etc. 33 Henry III (1248-49) - Thomas the son of John Jocelin has granted to god and to the church of Blakemore, etc, all that land with houses, orchards and all other things pertaining, which Richard Pekott once held of John, father of the father of Thomas, in his town of Selewes, to be had in pure and perpetual alms. And also he has granted to the same canons, etc. all the land and possessions,etc. which he has of the fee of his father Thomas, in the parish of Willigall. He married Katherine Battell.1 He resided, in 1225.1 John died.

She married John Jocelyn.2 Katherine died. She was the daughter of Thomas (Sir) Battell and Elizabeth de Enfeild. Katherine was born.2

Thomas died. Thomas was born.3 He was the son of John (Sir) Battell and NN---- Rochford. He married Elizabeth de Enfeild.3