Fergus was the son of Ercc King of Dalriada. Fergus died. Fergus, established an Irish kingdom of Dalriaa in Argyle, now Scotland. Ruled for three years in succession to his brother, Loarn, at aan uncertain date 498-501(?).

Child of Ercc King of Dalriada

Earl of Clare, Earl of Hertford and Gloucester, GILBERT de CLARE, son of Surety Richard de Clare, and himself a Surety, was born about the year 1180. In June 1202 he was entrusted with the lands of Harfleur and Mostrevilliers. He was one of the Barons still opposing the arbitrary proceedings of the Crown. He championed Louis the Dauphin, fighting at Lincoln under the Baronial banner, and was taken prisoner by William Marshall, whose daughter he later married. He led an army against the Welsh in 1228 and captured Morgan Gam, who was released the next year. After an engagement in Brittany, he died on his return at Penros in that Duchy, 25 October 1230. His body was conveyed by way of Plymouth and Cranbourn to Tewkesbury. He was buried there before the High Altar 10 November 1230. He married Isabella, sister of William Marshall, the Surety, and daughter of William Marshall, the Protector, on 9 October 1217. She died 17 January 1239/40.

Gilbert was born circa 1180.1 He was the son of Sir Richard de Clare Magna Charta Surety and (?) Amice Countess of Gloucester. He married Isabel Marshal on 9 October 1217.1 Gilbert died on 25 October 1230.1 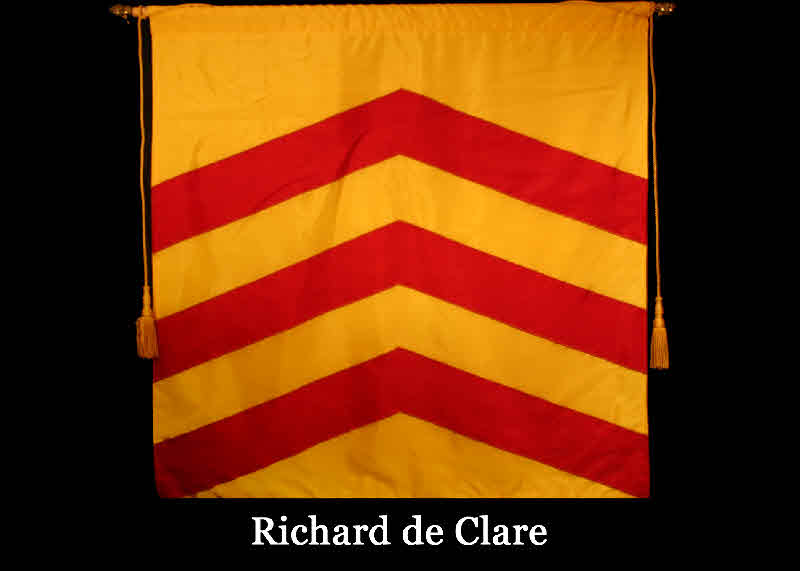 As for the Hertford Castle of the de Clares, it is one of two Castles: A 10th Century ruin or a 17th Century structure. The older Castle retains a wall and part of a Norman tower. The remainder of the building is a Jacobean accretion made of brick and completely modernized.

Gilbert de Clare built a Castle at Caerdigan, Pembrokeshire, Wales. A marriage brought it into the hands of William Marshall, who soon controlled the strongest castles on the peninsula. The keep has been transformed into a modern house. Of all the castles that finally came into William Marshall's possession, this was the most important to the area. Scholars believe there is evidence that it was originally built of wood.

RICHARD de CLARE, the Surety, was the fourth Earl of Hertford but, like his father and uncle, was more generally known as Earl of Clare. He was present at the Coronation of King Richard I at Westminster, 3 September 1189, and of King John, 27 May 1199. He sided with the Barons against King John, and his Castle at Tonbridge was taken. On 9 November 1215 he was one of the commissioners who, on the part of the Barons, was to treat of peace with the King. On 4 March 1215/6 his lands in counties Cambridge, Norfolk, Suffolk; and Essex were granted to Robert de Betun; he and his son were among the Barons excommunicated by the Pope in 1215. He died between 3 October and 28 November 1217. He married Amicia, Countess of Gloucester, second daughter of William FitzRobert, Earl of Gloucester, and his wife, Hawise, daughter of Robert de Beaumont, Earl of Leicester. She died 1 January 1224/5.

William Fitz Robert was the son of (?) Robert de Caen "the Consul", Earl of Gloucester and Mabel or Maud Fitz Hamon. Lord of the manor of Glamorgan and of Cardiff Castle, 2nd Earl of Gloucester. He married Hawise de Beaumont circa 1150.1 William died on 23 November 1183.1

Child of (?) Robert de Caen "the Consul", Earl of Gloucester and Mabel or Maud Fitz Hamon

Child of Mabel or Maud Fitz Hamon and (?) Robert de Caen "the Consul", Earl of Gloucester

Child of Mistress NN---- and Henry I King of England

Child of Ralph Basset and Hawise

Child of Hawise and Ralph Basset