This Surety was descended from Robert de Todeni, feudal lord of Belvoir Castle, in Lincolnshire, possessed of eight lordships at the time of the General Survey, who d. 1088. His eldest son by his wife, Adela:

William d'Albini-Brito, lord of Belvoir Castle, was a gallant commander in the war in Normandy, and d. 1155, having issue by his wife, Maud, widow of Robert, son of Richard Fitz-Gilbert declare:

William d'Albini, lord of Belvoir Castle, third feudal Baron. When his father died he was in ward to King Henry II and in 1194, he was in the army of Richard I, in Normandy. In the following year he was constituted sheriff of counties of Warwick and Leicester, and also held the same office for those of Rutland, Bedford, and Buckingham, between 1196 and 1199. Upon the accession of John to the throne he received several valuable grants, being already wealthy. In 1201, when the Barons refused to attend King John into France, he demanded that their castles should be given up to him as security for their allegiance, beginning with William d'Albini, of whom he claimed Belvoir Castle, instead of which he gave him his son, William, as a hostage.

He appears to have remained longer faithful to the king, as well as more moderate in his opposition to him, than most of the Barons, and did not join the insurgents until he could no longer with safety either remain neutral or adhere to the king, for so late as January, 1214-15, he was one of King John's commissioners appointed for the safe-conduct of such as were traveling to his court, at Northampton. After he joined the Barons he entered with great spirit into their cause, and was elected one of the Sureties for the observance of the Magna Charta, and was excommunicated; but after having gained their point, he was looked upon with suspicion because he did not attend the grand tournament, on June 29, to celebrate the victory, and it was not until after other Barons had alarmed him, that he fortified his castle at Belvoir, and joined them at London. But the sequel proves their suspicions were not well grounded. He was placed as governor of Rochester Castle, when, though he found it so utterly destitute of provisions as almost to induce his men to abandon it, he recruited and held it until famine, weakness, and watching obliged them to surrender to the king. The siege having lasted three months, and being attended with considerable loss, King John ordered that all the nobles in the castle should be hanged; but this sentence being resolutely opposed by his chief councilors, William d'Albini and his son Odonel, with several other Barons, were committed to the custody of Peter deMauley, and sent prisoners to Corfe and Nottingham Castles. Whilst d'Albini remained at Corfe, the king marched on Christmas morning, 1216, from Nottingham to Langar, near Belvoir Castle, and sent a summons to surrender. Upon this, Nicholas d'Albini, one of the Baron's sons and clerk in orders, delivered the keys to the king, asking only that his father should be mercifully treated. The fortress was then committed to the custody of Geoffrey and Oliver deButeville. His liberty was gained only by William d'Albini paying a fine to the king of six thousand marks (four thousand pounds), the sum being raised from his own lands by his wife, on their being delivered to her for that express purpose. After King John's death, though he submitted himself to King Henry III, he was forced to give his wife and son Nicholas as hostages for his allegiance; but in 1217 he was one of the king's commanders at the battle of Lincoln. He died at Offington, May 1, 1236, and his body was buried at Newstead, and his heart under the wall, opposite the high-altar, at Belvoir.

Children of William d'Aubigny and Mabel of Chester

Sir Robert de Ros Magna Charta Surety - 1215 was the son of Everard de Ros and Roese Trussebut. The Barons de Roos owned Helmsley or Hamlake Castle. Baedeker remarks only that it is an interesting Castle, but we can give some description of it. Hamlake has a rectangular bailey, a barbican, and an outwork at the East end of the bailey. Its singular defense was a double line of ditches, both of which were fed by the River Rye. The curtain wall was built about 1170, and the keep about 1190. The East gateway and barbican are ascribed to the 13th Century. The Castle, except for the keep, was destroyed in 1649. The other half remains, one hundred feet above the bailey. The keep is an excellent example of traditional design, combining the old square style with coming roundness in towers. The outside of the tower is rounded to baffle sappers, and the portion inside the curtain is square, as a convenience for the occupants.
ROBERT de ROOS of Fursan, the Surety, fourth Baron of Hamlake Manor, was born in 1177. When only fifteen years of age he had paid a thousand marks' fine for livery of his lands, and in 1197 when aged twenty years, while with the King of Normandy, he was arrested, though we know nothing of the offense, and was committed to the custody of Hugh de Chaumont. However, de Chaumont trusted his prisoner to William de Spiney, and the latter allowed him to escape out of the Castle of Bonville. King Richard thereupon hanged de Spiney and collected a fine of twelve hundred marks, about eight hundred pounds, from Roos' guardian as the price of his continued freedom.
When John became King, he gave young Roos the whole Barony of his great grandmother's father, Walter d'Espec, as conciliation. About the 14th of King John, Robert assumed the habit of a monk, whereupon the custody of all his lands and Castle Werke, were committed to Philip d'Ulcote. But Robert did not long continue as a recluse, as in about a year he was executing the office of high sheriff of co. Cumberland. At the beginning of the struggle of the Barons for a constitutional government, he at first sided with King John and, in consequence, obtained some valuable grants from the Crown. He was made governor of Carlisle, but was later won over by the Barons. He returned to his allegiance in the reign of Henry III for, in 1217/8, his manors were restored to him, and, although he was a witness to the second Great Charter and the Forest Charter of 1224, he seems to have been in favor with the King.
Roos erected the Castles of Helmsley, or Hamlake, in Yorkshire, and of Werke, in Northumberland. He was a member of the Order of Knights Templar. He died in 1226/7 and was buried "in his proper habit" in the Knights' Church, or the New Temple in London, where his tomb may be seen. His effigy is described by Gough, in "Sepulchral Monuments," as "the most elegant of all the figures in the Temple Church, representing a comly young knight in mail, and a flowing mantle with a kind of cowl; his hair neatly curled at the sides; his crown appears shaved. His hands are elevated in a praying posture, and on his left arm is a short, pointed shield charged with three water-bougets. He has on his left side a long sword, and the armor of his legs, which are crossed, has a ridge, or a seam up the front, continued over the knee. At his feet is a lion, and the whole figure measures six feet two inches." He married Isabel, daughter of William the Lion, King of Scotland, and widow of Robert Bruce.

Isabel, Of Scotland was the daughter of (?) William The Lion King of Scots and Ermengarde de Beaumont. Isabel, died. She married Sir Robert de Ros Magna Charta Surety - 1215 in 1191.1,2 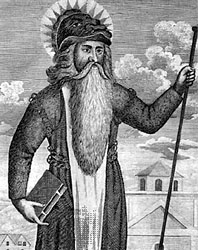 Child of (?) William The Lion King of Scots and Ermengarde de Beaumont

Ermengarde de Beaumont was the daughter of Richard de Beaumont. Ermengarde died. She married (?) William The Lion King of Scots.1

Child of Ermengarde de Beaumont and (?) William The Lion King of Scots

Child of Henry of Huntingdon and Ada de Warenne

Ada de Warenne was the daughter of William de Warenne 2nd Earl of Surrey and Isabel de Vermandois. She married Henry of Huntingdon in 1139. Ada died.1,2

Child of Ada de Warenne and Henry of Huntingdon

(?) died. He married Maud of Northumberland.1,2

Child of (?) David I King of Scots and Maud of Northumberland

Child of Maud of Northumberland and (?) David I King of Scots