Sarah King was the daughter of Thomas King and Anne Collins. She married Nathaniel Joslin in 1656 at Lancaster or Marlboro, Massachusetts.1,2 Sarah died on 2 July 1706 at Marlborough, Massachusetts.3

He was a weaver. Nathaniel was born on 21 June 1658 at Lancaster, Massachusetts.1 He was the son of Nathaniel Joslin and Sarah King. Nathaniel died on 5 March 1726/27 at Marlborough, Massachusetts, at age 68.1

Sarah was born on 15 July 1660 at Lancaster, Massachusetts.1 She was the daughter of Nathaniel Joslin and Sarah King.

Dorothy was born on 4 March 1661/62 at Lancaster, Massachusetts.1 She was the daughter of Nathaniel Joslin and Sarah King.

Elizabeth was born on 7 June 1667 at Lancaster, Massachusetts.1 She was the daughter of Nathaniel Joslin and Sarah King.

Martha was born circa 1673 at Marlborough, Massachusetts.1 She was the daughter of Nathaniel Joslin and Sarah King. 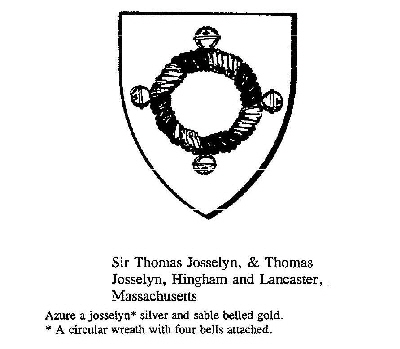 Thomas Joslin, as he spelled the name, probably received his portion of his father's estate at the time of his marriage, as his father, in his will of 1626, bequeathed to him only 5£'s. As the baptisms of his children are not recorded in the parish registers of Roxwell, it is certain that he was not living there when his children were born. He was of Barham, co. Suffolk, just before his emigration to New England, his daughter Mary was baptized at Barham 16 Mar. 1633. In April 1635 he embarked for New England in the "Increase" of London, the passenger list containing the names of Tho.: Joslin, husbandman, aged 43, Rebecca his wife aged 43, Eliza: Ward, a maid servant, aged 38, and the following children of the said Tho: Joslin: Rebecca, aged 18, Dorothy aged 11, Nathaniell, aged 8, Eliza, aged 6, and Mary, aged 1


On his arrival in New England he settled in Hingham, wher he was a proprietor and town officer, and bought land of his son-in-law Thomas Nichols in 1638. He and his son Nathaniel sold their lands at Hingham 11 Mar. 1652 to George Lane and Moses Collier, and removed to Lancaster, where Thomas signed the civil compact 12 Nov. 1654. In his will, dated 9 May 1660 and proved 2 Apr. 1661, he appoints his wife Rebecca executrix, and mentions his sons Abraham and Nathaniel, grandson Abraham, and daughters Rebecca Nichols, wife of Thomas, Mary Sumner, wife of Roger, and Elizabeth Emons.

Thomas was born circa 1591 at Roxwell, county Essex, England.1 He was the son of Ralph Josselyn. He married Rebecca Jude circa 1615 at England.1 Thomas Josselyn was present at Mary Joslin's christening on 16 March 1633/34 at Barham, County Suffolk, England.2 Thomas immigrated to New England on 15 April 1635.1 Thomas died on 3 January 1660/61 at Lancaster, Massachusetts.1

Rebecca was born circa 1616 at England.1 She was the daughter of Thomas Josselyn and Rebecca Jude. Rebecca died on 22 September 1675 at Hingham, Plymouth County, Massachusetts.1

Dorothy was born circa 1623 at England.1 She was the daughter of Thomas Josselyn and Rebecca Jude. Dorothy died on 2 December 1645 at Roxbury, Massachusetts.1

Elizabeth was born circa 1628 at England.1 She was the daughter of Thomas Josselyn and Rebecca Jude.

Ralph died. He was a yeoman.


Lack of evidence makes it impossible to determine which wife was the mother of each child.

Mary was born at prob. England.1 She married Ralph Josselyn on 21 May 1583 at Roxwell, county Essex, England.2

John was born circa 1584 at Roxwell, county Essex, England.1 He was the son of Ralph Josselyn and Mary Bright.

He was a yeoman. Simon was born circa 1594 at Roxwell, county Essex, England.1 He was the son of Ralph Josselyn.

Richard was born circa 1598 at Roxwell, county Essex, England.1 He was the son of Ralph Josselyn.

Charlemagne "Charles the Great" Frankish Emperor of the West1,2,3,4,5,6 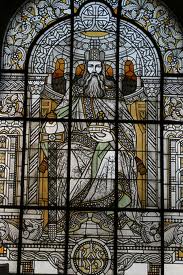 was born on 2 April 747 at Ingelheim.7,8 He was the son of Pepin III "The Short" King of the Franks and Bertrade deLaon "au Grand Pied" ("Broad Foot").


Charlemagne, or "Charles the Great, Carolingian King" of the Franks, came to rule over most of Europe and assumed (800) the title of Roman Emperor. He is sometimes regarded as the founder of the Holy Roman Empire. Charlemagne was probably born in 742 at Aachen. In 768 he and his brother Carloman inherited the Frankish kingdom (most of present-day France and a part of western Germany) from their father Pepin "The Shore". The entire kingdom passed to Charlemagne when Carloman died in 771.

Charlemagne inherited great wealth and a strong military organization from his father and brother. He used these assets to double the territory under Carolingian control. In 772 he opened his offensive against the Saxons, and for more than three decades he pursued a ruthless policy aimed at subjugating them and converting them to Christianity. Almost every year Charlemagne attacked one or another region of Saxon territory. Mass executions-- 4,500 Saxons were executed on a single day in 782--and deportations were used to discourage the stubborn. The Saxons proved to be a far more difficult enemy than any of the other peoples subjugated by Charlemagne. For example, the Lombards were conquered in a single extended campaign (773-74), after which Charlemagne assumed the title "King of the Lombards." In 788 he absorbed the duchy of . Bavaria, and soon thereafter he launched an offensive against the Avar empire. The Avars succumbed within a decade, yielding Charlemagne a vast hoard of gold and silver. After one disastrous campaign (778) against the Muslims in Spain, Charlemagne left the southwestern front to his son Louis. The latter (later Emperor Louis I), with the help of local Christian rulers, conquered Barcelona in 801 and controlled much of Catalonia by 814. On Christmas Day, 800, Charlemagne accepted the title of emperor and was crowned by Pope LEO III. For several years after he regarded the imperial title of being of little value. Moreover, he intended to divide his lands and titles among his sons, as was the Frankish custom. At his death on Jan. 28, 814, however, only one son, Louis, survived; Louis therefore assumed control of the entire Frankish empire.

The internal organization of Charlemagne's empire varied from region to region. In much of what is today France, and especially in the south, the old Roman civitates (fortified cities) served as the focus of most important aspects of political, military, religious, and social organization. Both the count of the city, appointed by Charlemagne as his representative, and the bishop made their respective headquarters in the civitas. The count or his agent led the local army, and the walls of the civitates afforded protection for the inhabitants both of the city and the nearby countryside. In those parts of the empire that had not been part of the Roman world, Charlemagne made an effort to impose a similar system. He divided newly conquered lands into pagi (districts), which were placed under the jurisdiction of counts who exercised the same kind of administrative powers of their counterparts to the west. Charlemagne also sought to establish these new pagi as dioceses. In frontier areas, Charlemagne often established districts that were essentially military in their purpose and organization; these were called marks or marches. Local customs were everywhere perpetuated by recognition of traditional laws. The laws, some unwritten, of each of the various peoples of the Carolingian empire, such as Salian Franks, Ripuarian Franks, Romans, Saxons, Lombards, Bavarians, Thuringians, and Jews, were codified and/or modified if local codes already existed, they were recognized. This judicial autonomy enjoyed by the several peoples of the empire indicates the diversity that not only existed but also flourished under Charlemagne. The emperor did, however, legislate to provide a system by which these various peoples could interact with each other. The central administration of the empire, like the local administrations, was rudimentary. A palatine court followed Charlemagne on his numerous campaigns; during the later years of his life, when he remained at AACHEN, the court stayed there. Charlemagne also sent missi dominici, high-ranking agents of the central government, from the court to see that his orders, often cast in the form of capitularies (ordinances divided into capitula, or chapters), were enforced. As part of his administrative efforts, Charlemagne sought to standardize weights, measures, and coinage. He also made an attempt to control and develop trade. To these ends he strongly encouraged the development of Jewish communities.

Charlemagne's concern for administration and his interest in seeing the church function effectively led him to encourage a rudimentary educational system based in monasteries. Thus a small group of clerical and lay administrators attained a useful level of literacy.

Charlemagne left the development and implementation of this system largely to Alcuin. The latter's work led to what some scholars have called the Carolingian Renaissance. At Charlemagne's court a group of scholars was gathered that included men from England, Spain, and Italy, as well as native Franks and probably Jews.

Charlemagne has been credited with great political and humanitarian vision and a devout religious bent; as a result, some have been led to think of his military ventures as crusades. In fact, he was a gluttonous and superstitious illiterate, or semiliterate, who had a considerable capacity for brutality. His accomplishments were due mostly to the energy with which he pursued his military goals and the ruthlessness with which he treated any opponents. Nonetheless, his achievements were considerable, and the effect of his conquests was to spread Roman Christianity across central Europe.


He married Hildegrade Countess of Vinzgau circa 771 at Aachen.9 Charlemagne "Charles the Great" Frankish Emperor of the West was present at Pepin King of Italy's christening on 12 April 777 at Rome, Italy.10 died between 28 January 814 and 815 at Aux-La'Chapelle.11