Simsbury, Ct. was never included within the limits of Windsor, Ct, it was, however, by general consent considered as belonging to that Plantation, and hence, in 1663, a committee, consisting of Captains Newberry, Edward Griswold, and John Morse, were appointed "to lay out all those lands that are yet undivided at Massacoe (the ancient Indian name of the town) to such inhabitants of Windsor as desire and need it." The committee in Dec. 1666, specified the terms upon which those who took uplands at Massacoe should have them. These were- that within two years they should make improvements by plowing, mowing, building and gencing, and that they should live on their grants two years.

The first grants by the committee, of which any record exists, were made in 1667. These consisted of meadow lands, bordering on the river, and were made to various person. Peter Buell was awarded a portion of the Hop Meadow, but it does not appear how much land was allotted him, or what consideration he paid therefor, probably nothing more than his proportion of the acutal expenses of the committee. The name of Peter Buell as a foreman appears in the same list of names.

At the May Session of the General Assembly, in 1677, the name of Peter Buell appears to a petition, with nine others, asking that the rates for defraying the public charges be levied only upon lands, which prayer of the petition was granted.

On November 3, 1674, Peter Buell, as one of a Committee of Three, for the Town of Simsbury, joins his associates and grants the privilege to various Indians to hunt for venison in the Town of simsbury during their lifetime.

On the 7th of May, 1682 Peter Buell is found to have joined in a petition to the General Court for liverty "to put the church in Gospel order."

" On a training day, November 29, 1686, Peter Buell was chosen by the train band of Simsbury their Sergeant; he had twenty-three votes, and so was orderly proclaimed by the chief military officer, Sergeant of the Train-band of Simsbury."

"December 29th 1687, voted by the inhabitants of Simsbury to allow Peter Buell for his Deputyship and expenses, twenty shillings.

In May 1688, Peter Buell drew lot no.2, in the tier of lots lying in the Easter section of the Town know as Turkey Hills (now Granby), the lots mumbering from North to South.

Their Children: b. Simsbury, CT.

Peter was born on 19 August 1644 at Windsor, Connecticut.1 He was the son of William Buell and Mary Post or Thomas ?

Bernard Capen, immigrant ancestor of the old American families of this name, was born in England. 26 February 1632/3: "This day Christofer Gould married with Rachell Beake, and shortly after, when Aquila Purchas, Bernard Capen and others went for New England, he was by Mr. White chosen clerk of Trinity Parish, and by the town schoolmaster of Trinity School". This places Bernard Capen and his family on the un-named Weymouth ship which arrived in Boston about 24 July 1633. He was a proprietor and one of the original grantees of Dorchester Massachusetts, August 5, 1633. He was admitted a freeman, May 25, 1636. Bernard was a shoemaker by trade. His homestead was on what is now Washington St., near Wheatland Ave. The last land granted him was at South Boston, March 18, 1637, "with the cows pasture and other land". The family has been prominent in Dorchester from the first settlement to the present time. Among the most influential and useful citizens of the town have been the lineal maker descendants of Bernard Capen. He lived but a few years after coming to the new world.


Bernard's will is on file in Suffolk county and reads in part: "octo 9th 1638 Sonne John five acres of and out of my great lott, next adjoining to his lott ye which he is to possess immediately after my decease which is to fulfill a promise made at his marriage. To wife all such lands and goods as I now possess during her life. And when it shall appear that her days drawe to an end that she with the rest of my friends who I put in trust, to divide these lands and goods to my children equally. If she change her name by marriage with another man then she shall with the audits of those of my friends give portions equally to my children. Now these my friends which I put in trust to my brother Duer and William Sumner". "George Duer and William Sumner disposed before County Court Nov. 19, 1652 that this was the last will of Bernard Capen. John Capen deposed before the Court Nov 19, 1652 that the time his father made the will in the year 1638." fulfill a promise made.
Bernard was born circa 1562 at England.2,3 He married Joan Purchase or Purchis on 31 May 1596 at Whitsun Week, England.2,3 Bernard immigrated to (an unknown value) in 1635.4 Bernard died on 8 November 1638 at Dorchester, Suffolk, Massachusetts.1

Children of Bernard Capen and Joan Purchase or Purchis

Children of Joan Purchase or Purchis and Bernard Capen

F
Joanna was born. She was the daughter of Deacon William Rockwell and Susanna Capen.

F, b. circa 1623
Francis was born circa 1623 at England.1 She was the daughter of William Vassall and Ann King.

F, b. circa 1633
Margaret was born circa 1633 at England.1 She was the daughter of William Vassall and Ann King.

Owen Rowe, writing to John Winthrop during the winter of 1636, requested that "Mr. Rainsford may be accommodated with lande fro a farme." Thereupon the Puritan Government gave Elder Edward Rainsford a small island of eleven acres located between Peddock's and Long Islands, about a seven miles' sail from Boston. This island has for many years been called one of the Harbor's prettiest, but in its present runinous state it is hardly attractive from the channel. West Head still contains many delightful nooks and coves, however, and the High Bluff on the eastern side is a well known landmark. This bluff slopes away on the inside to form a flat area large enough for a baseball diamond.


Between this land and West Head there is a narrow strip of beach, formerly wide enoooough for a road but now barely passable at high tide. When seen from the air, the island remembles an elongated animal.


Edward Rainsford, or Raynsford as the name was sometimes spelled, was the brother of Sir Richard Rainsford, Lord Chief Justice of the King's Bench. At the time of the Antinomian Controversy, the Puritans declared Rainsford a heretic and disarmed him. Elder Rainsford lived to a good old age and died on August 1680. His widow, who survived him by eight years, is buried in King's Chapel graveyard. By his second wife, Elizabeth, Edward Rainsford had ten children.

His body was interred on 17 August 1680 at in King's Chapel Boston, Massachusetts.8

Children of Edward Raynsford and Elizabeth Dillie or Dilloe ?

Thankful was born on 28 January 1729/30 at Rochester, Massachusetts.1 She was the daughter of Thomas Ashley and Phebe Freeman.

Miriam was born on 14 July 1732 at Rochester, Massachusetts.1 She was the daughter of Thomas Ashley and Phebe Freeman. 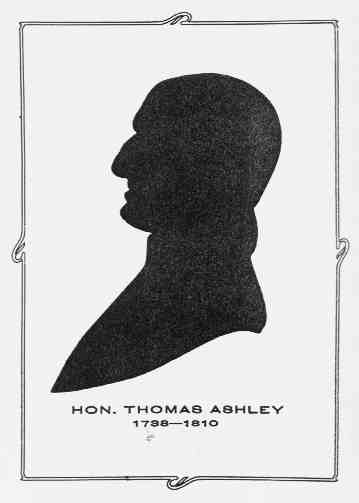 Thomas was born on 5 June 1738 at Rochester, Massachusetts.1 He was the son of Thomas Ashley and Phebe Freeman. Thomas died on 9 July 1810 at Poultney, Vermont, at age 72.1

John was born on 30 August 1740 at Rochester, Massachusetts.1 He was the son of Thomas Ashley and Phebe Freeman.