Seldom are triplet calves born in this part of the country, and when three calves are born we believe that is worth mentioning in these columns.
Such was the case at the Louis Staker farm south of Reinbeck on December 9th. Louis knew that an Anguscow was about due andwas watching her as he had the cow penned up.
That morning, when he went to the barn there was a nice bull calf, and the mother seemed alright, and so did the calf.
Later Louis made another trip to the barn to see how the animals were progressing, and to his surprise was another bull calf and a little sister in the way of a heifer calf, making tree of them.
The mother evidently heard about the enormous pig crop and the huge surplus corn crop and was just doing her bit toward the steak market.
He was a farmer. Louis was born on 1 October 1914 at Grant Township, Tama County, Iowa. He was the son of Julius Staker and Lillian Sienknecht. He married Melda Hass on 16 October 1940 at in Little Brown Church Nashua, Iowa.1 Louis died on 29 June 1993 at in Allen Memorial Hospital Waterloo, Blackhawk County, Iowa, at age 78.2 His body was interred on 2 July 1993 at in Maple Hill Cemetery Gladbrook, Tama County, Iowa.

M
Bill Hinson was the son of Glen Florer Hinson and Lottie Willis. 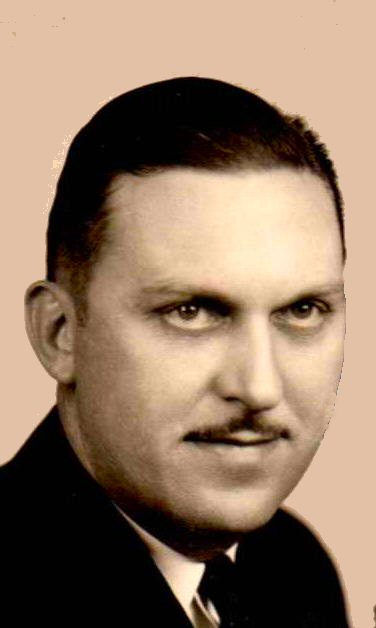 Leland Delmar Hinson Obituary
Funeral services for Leland Delmar (Lee) Hinson, 55 of 210 Gayle Street, who died at 6:30 pm Saturday, at home of a heart attack will be 1:30 pm Wednesday at Our Savior Luheran church with the pastor the Rev. R. Hildebrandt, officiating.
The casket will be taken from the Locke funeral home to the church at noon Wednesday where friends may call until service time.
Mr. Hinson was born May 20, 1908 at Ellery Illinois, to Glen and Lottie Willis Hinson. He moved with his family to Hudson in 1919 where he was educated. On July 22, 1945 he married Bertha Buhrow in Waterloo.
He served in the U.S. Navy during World War II and was aborard USS Princeton when it was sunk in the Battle of Philippine Sea. Mr. Hinson was a member of the Amvet Post NO. 19. He was employed by the Chamberlain Corp. and was a member of the International Association of Machinists Local 1318, AFL-CIO.
Mr. Hinson is survived by his widow, his mother, of 519 Washington St; two brothers, Corwin of Cedar Falls, and Gerald of 1736 Williston Ave; and one sister, Mrs Louise Garrett of 419 Leland Ave. He was preceded in death by his father and two brothers.
Burial will be in the Garden of Memories where graveside services will be performed by the Amvet Post 19.

M
Clayton Hinson was the son of Glen Florer Hinson and Lottie Willis.

F
Louise Hinson was the daughter of Glen Florer Hinson and Lottie Willis.

Mrs. J.N. Lage, resident of Reinbeck and north Tama county for fifty-five years, died at her home early Saturday morning after an illness of about two years, which became serious only in the past months. She suffered from asthma and heart truble.
Emilie Volkens Lage was born in Hemingstadt, Holstein, Germany, 3 April 1860 and was thus past seventy five years of age at her death. She came to America as a young woman in 1880 with her parents Carlson and Anjeline Volkens and the family settled first near Davenport, moving in a year or two to Gladbrook.
April 14, 1883 she was united in marriage to Johannes Nicholas Lage at Grundy Center and the couple lived for twenty-five years on their home farm south of Reinbeck. In 1912 they retired from active farming and moved to Reinbeck which has been ther home since.
She was the mother of four children, three of whom with her husband, survive to murn her death. These are Mrs. Minnie Strohbehn, Dinsdale, and Mrs. Almla Block and Albert Lage, of Gladbrook. A daughter Clara, died in 1900. There are also five grandchildren, one great-grandchild and one brother, Julius Volkens, of Reinbeck.
Mr. and Mrs. Lage were to celebrate their golden wedding anniversary in April, 1933, and at that time she was in fair health. Since then the onslaught of asthma and weakening of the heart caused her to remain closely in her home most of the time.
Funeral services were held Tuesday afternoon at the home, conducted by Rev. R. Cary Hufstader, pastor of the Congregational church. Burial was in Maple Hill cemetery. Pall beareres were James and Theo. Lage, Carl Wieland, Ed Brauch; Grover Volkens and Alfred Volkens, all of Gladbrook. 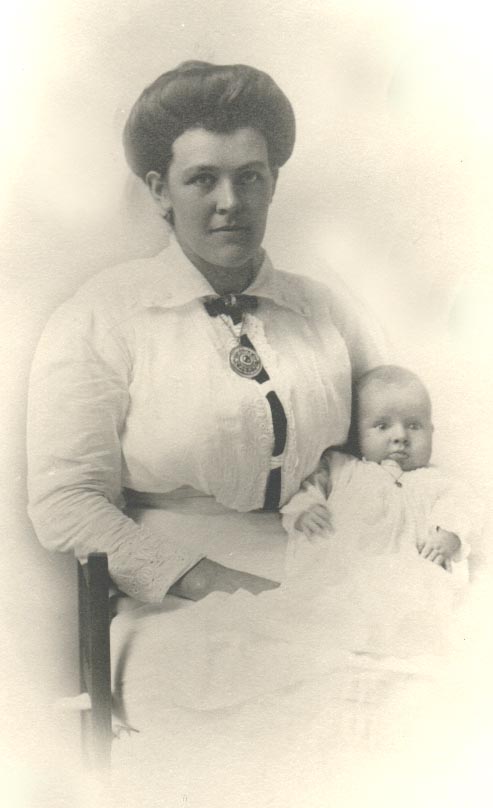 Had Been invalid for over Twenty Years; Burial at Maple Hill Cemetery

Funeral services were conducted Wednesday afternoon at the French funeral home in Reinbeck, for Mrs. Ralph Block, 66, who died at the Allen Memorial hospital in Waterloo on Sunday, July 27th, where she had been a patient for more than a week. Rev. David Arnold pastor of the Congregational church in Reinbeck officiated and burial was made in the Maple Hill cemetery north of Gladbrook.
Mrs. Block had been a patient sufferer from arthritis for the past twenty-six years, and had been compelled to rest in a wheel chair during that time.

Life Sketch:
Mrs Block was born Alma Lage, the daughter of the late Mr. and Mrs. J.N. Lage, and was married to Ralph Block. The couple farmed near Reinbeck for a number of years and at the time of her death were occupying a recently built home in Lincoln.
Mrs. Block is survivied by her husband, three children; Leroy and Leo, twins, both married and now farming near Reinbeck; one daughter, Mrs. Harold Dielman (Clara), living on a farm suth of Reinbeck; one sister Mrs. Alton Strohbehn of Reinbeck; one borhter, Albert Lage, farming near Gladbrook. There are also six grandchildren.
Preceding her were her parents, one infant daughter, Esther Ruth; one sister, Clara, who passed away in early life.
Pallbearers at the services Wednesday were: Toby Larsen, Jr., Clarence Boege, Leonard Soricek, Roy Staker, Alvin Staker, and Wm. Thede.

Alma was born on 18 November 1885 at Gladbrook, Tama County, Iowa.3 She was the daughter of Johannas Nickoles Lage and Emelia Volkens. She married Ralph Block on 22 February 1910. Alma died on 27 July 1952 at Waterloo, Blackhawk County, Iowa, at age 66.3 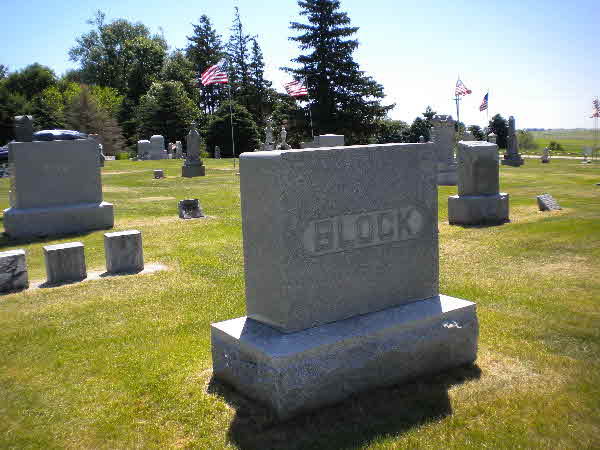 He was a farmer. Jurgen Block lived at Spring Creek, Tama, IA.
Jurgen Block arrived in the United States 23 April 1866 aboard the Ship "Teutonia" from Hamburg. The record states that Jurgen was 26 years of age (?) and a carpenter from Germany.

One of the old settlers of Tama County passed away when Mr. Jurgen Block died on Thursday 24 August, in the ripe age of 82 years 11 months and 15 days. He was born on 9 September 1833 at Wiesick near Kropp, Schieswig, Holstein, Germany. In 1866 he immigraed to this country settling at Davenport, Iowa where he stayed only a few years. After having married Miss Catherina Dau on 26 September 1871, he moved to a farm in Tama county with his family. His death came very unexpectedly to his beloved ones as he had gone down town on Thursday and even had taken the dinner with his family. He leaves to mourn his dath besides the widow, two sons, John Block near Gladbrook and Ralph Block near Reinbeck, four daughters, namely, Mrs. Alvine Steffens near Garwin, Mrs. Tine Landt in suth Dakota, Mrs. Annie Mumm at home, Mrs Emma Rehder near Gladbrook and nine grand-children.


To the kind friends and neighbors who so willingly assisted us during the death of our beloved husband and father, we wish to express our hearfelt thanks, also to those sending flowers an assisting in the music. May the Lord bless you all and spare you such sorrow is our sincere wish.


Mrs. Jurgen Block died at her home in Gladbrook Thursday at the age of eighty-seven years. according to word received here by relatives. She had been ill for several months with general breakdown natural for her age.

The funeral will be at 1:30pm Saturday at the home. Rev. H.H. Specht, pastor of the Evangelical church, will officiate. Internment will be in Crystal cemetery.


Catherine was born. She was the daughter of Claus Dau. She married Jurgen Block on 26 September 1871 at Davenport, Scott, Iowa. Pastor: J. Gass
Witness: Jurgen Holling.1 Catherine died on 18 January 1933 at Gladbrook, Tama County, Iowa. Ill from 7 December to 18 January
died at 11:40am
Phisician George Meyer.2

Mr. and Mrs. Wilmer Hulme of Reinbeck, formerly of the Traer community will observe their 25th wedding anniversary Saturday, October 24th by being feted at a family supper in the Reinbeck Memorial Building. The former Dala Staker and Mr. Hulme were married at the Little Brown Church near Nashua, Iowa, 24 October 1934. The couple have three children, Gleva, Willie, and Mrs. Leo Block of Lincoln. They also had another son Louis, who passed away in 1956. There are two grandchildren. Wilmer was born at Buckingham Township, Tama, Iowa. He was the son of Samuel Hulme and Margaret Ann "Maggie" Dinsdale. He married Dala Staker on 24 October 1934 at Nashua, Chickasaw County, Iowa. Wilmer died at Reinbeck, Grundy County, Iowa.

Lincoln - Ralph Block, 71, of Lincoln, suffered a fatal heart attack at the wheel of his car at 1:00 pm Sunday near Lincoln while returning from Morrison and died almost instantly. The went into a ditch.
Block lived in town but farmed 80 acres near Lincoln.
He is survived by two sons, Leo, Gladbrook; LeRoby, Hudson, and one daughter, Mrs. Harold Dieleman, near Traer.
His wife preceded him in death.
Funeral services will be at 2:00 pm Wednesday at Salem church, with burial in Maple Hill cemetery two miles south of Lincoln.
The body is at the French funeral home in Reinbeck. Ralph was born on 23 February 1885 at Gladbrook, Tama County, Iowa.2 He was the son of Jurgen Block and Catherine "Catherina" Dau. He married Alma Lage on 22 February 1910. Ralph died on 16 September 1956 at Lincoln Township, Tama County, Iowa, at age 71.2 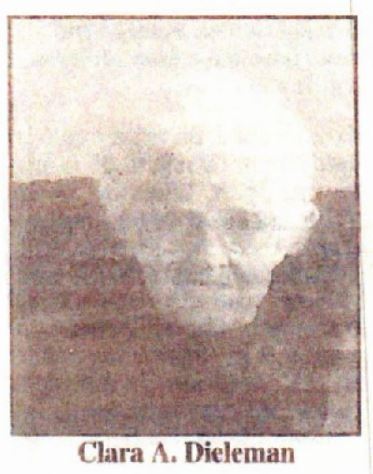 F
Michele Kathleen Lyon is the daughter of David Merrill Lyon and Betty Alice Megonigle. She married Fred Ehlers before 15 May 1968. She married Kent Leo Block on 6 November 1976 at Independence, Iowa.

Francis was born on 9 September 1850. He was the son of Hercules Hodges Crocker and Lydia Ann Nye. Francis L. Crocker married Sarah Cudy circa 1870.1