M
Richard Arnold was the son of Thomas Arnold and Margaret NN----.

F
Elizabeth, bapt. 18 January, m 1588 Robert Rant, (Boyd's Marriage Index; the citation is to licenses of the Consistory Court of Norwich, the microfilm of which is illegible, according to Newil D. Thompson, F.A.S.G.) Elizabeth was born at Lowestoft, county Suffolk, England. She was the daughter of William Arnold and Alice NN----.

F
Margaret, m. William Rant. Margaret was born at Lowestoft, county Suffolk, England. She was the daughter of William Arnold and Alice NN----.

Nathaniel Arnold, baptized at Lowestsoft 28 December 1569. He married there 4 October 1591 Alice Wylde, who was baptized there 8 January 1575, daughter of William and Mary [Harman] Wylde (who had been married there 29 August 1569). Nathaniel and Alice moved to Amsterdam after 1606 (when their daughter Martha was buried in Lowestoft), but before 6 July 1613 (the date of their daughter Mary's marriage intention). Nathaniel Arnold probably died before 14 March 1626, the date of their daughter Lydia's Marriage intention there, but there is no record of his burisal in the indexes to Amesterdam burial records. Alice died after 16 May 1631, the date of her son's marriage intention. Nathaniel was born at Lowestoft, county Suffolk, England. He was the son of William Arnold and Alice NN----. He married Alice Wylde on 4 October 1591 at Lowestoft, county Suffolk, England. Nathaniel died at Amsterdam, Holland.

M
Isaac, bapt. 6 December 1573, married Agnes NN---- and had Children baptized at Lowestoft after April 1599. Isaac was born at Lowestoft, county Suffolk, England. He was the son of William Arnold and Alice NN----.

F
Christian, bapt. 9 September 1578, married 10 May 1599 Richard Mayhew. Christian was born at Lowestoft, county Suffolk, England. She was the daughter of William Arnold and Alice NN----.

M
Nathaniel was born at Lowestoft, county Suffolk, England. He was the son of Nathaniel Arnold and Alice Wylde. Nathaniel died.

"We now approach a family named Cogan which is of especial importance to American genealogy because it sent more of its scions to New England. Its principal seat in Somersetshire was the town of Taunton, but members of the family also lived in the Parish of Wellington, and the family as a whole may have derived from Parish of Chedzoy.

Nothing definite can be said about the parents of the children listed below this sketch. They did not have any of their children baptized in the Church of St. Mary Magdalen, Taunto, co. Somerset, in which the children and many of the grandchildren of their son Henry were baptized. Since a relationship with William Cogan of Wellington, can be definitely proved, it may be that the registers of that parish, which have not been examined in this connection, hold evidence on the origin of this family.

On the other hand, a Henry Cogan married Elizabeth Carye at Chedzoy on 1 July 1565, that is, about the year we should expect the parents of Henry Cogan to have been married. He named a dauther Elizabeth. Moreover, an Elizabeth Coggen, status and parentage not stated, was buried from the same church 17 April 1615, and she may have been Henry's mother, widow of the elder Henry. The parish of Chedzoy records a total of eighteen Cogan marriages between 1564 and 1661. A Henry Cogan was overseer of the will of John Stevard, of Chedzoy, dated 23 January 1533 who named a goddaughter, Jone Cogan. John Cogan, of Chedsey, husbandman, held property in Bridgewater, according to a deed dated 11 July 14 Elizabeth=1572 (Deed no. 155, SRS, 51:94). Among lost wills of Chedzoy we may cite one of Robert Cogan, probated 1541, another of Henry Cogan, probated 1577, the latter perhaps that of the husband of Elizabeth Carye. The first two sons listed below were quite clearly brothers; the second two children probably, and the third two possibly, belonged to the same parents, and in some way not known William Cogan and Christian Baylie were certainly kin to the first two." 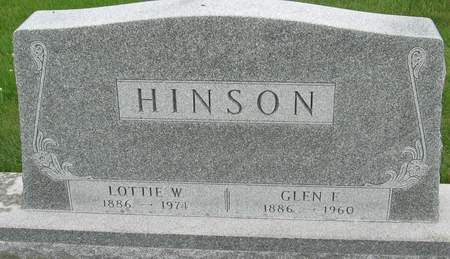 Hudson: Services for Glen F. Hinson 73, of Rt 2 Hudson, will be at 2pm Tuesday at the Hudson Community church; burial in Hudson cemetery. Mr. Hinson died Friday afternoon at his farm home of a heart attack; survived by wife; four sons, Corwin, Rt 4, Cedar Falls; Clayton Rt 2 Hudson, Lealand and Gerald, both of Waterloo; one daughter, Mrs. Louise Garrett, Waterloo; one sister, Mrs. Helen Hoek, Portland, Oregon. Locke funeral home, Waterloo, in charge of arrangements; the family suggests that those who wish to do so may make contributions to the memorial fund of the Hudson Community church. Glen was born in 1886 at Illinois. He was the son of James Warder Hinson and Abbie Elliott. He married Lottie Willis on 5 April 1905. Glen died on 12 February 1960 at on Bonnie Brae Farm Hudson, Black Hawk, Iowa. S.F. Hesse MD
Burial 16 February 1960, Hudson Cemetery
Funeral Director, C.P. Locke, Waterloo, IA.

CEDAR FALLS - Services for Mrs. Lottie Hinson, 88 of Boorom Nursing Home, will be at 1:30pm Friday at Hudson Community Church with burial in Hudson Cemetery.
Mrs.Hinson died Wednesday morning at the home of complications of age. Friends may call at Locke Funeral Home, Waterloo, until noon Friday and at the church until service time.
Lottie was born on 27 March 1886 at Ellery, Edwards, Illinois.1 She was the daughter of Louis Willis and Jane Gillard. She married Glen Florer Hinson on 5 April 1905. Lottie died at Cedar Falls, Blackhawk, Iowa. 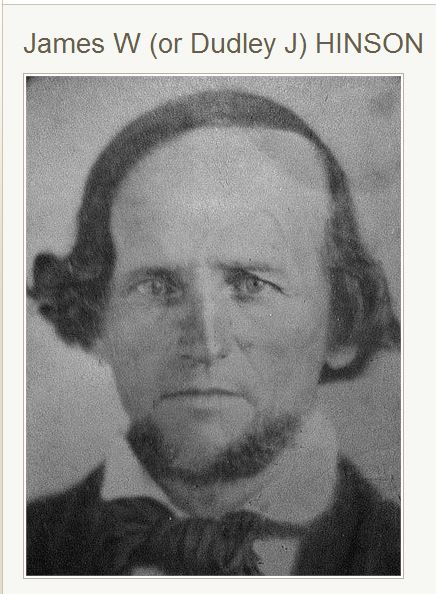 James Warder Hinson was born circa 1850 at Maysville, KY. He was the son of Dudley James Hinson and Nancy J. Heck. He married Abbie Elliott before 1886.1 James Warder Hinson died on 22 April 1919 at bur-Graceland Cem, Albion, IL, Waterloo, IA.

?
Gerald Hinson was the child of Glen Florer Hinson and Lottie Willis.