M
John H. Staker was the son of Henry Staker and Wilhelmina Johanna Dorothea Boldt. He was a farmer.

F
Antje died. Antje was born. She was the daughter of Thomas Lage and Abel Schlapkohl.

M
William Staker was the son of Henry Staker and Wilhelmina Johanna Dorothea Boldt. He was a farmer.

M
Louis Staker was the son of Henry Staker and Wilhelmina Johanna Dorothea Boldt. He was a farmer.

Mrs. Jochim Lage an old resident of Gladbrook and Tama County, died at her home in this city, Thursday, 23 January 1908 at the age of 79 years, 11 months and 17 days.
Catherine Speth was born in Holstein [Schönberg] Germany on February 9, 1828. On October 9, 1850 she was married to Jochim Lage and to this union nine children were born, 6 boys and 3 girls. Mrs. Lage came from Germany in 1864 and located in Scott County. Four years later family moved to Lincoln Township, Tama County, and settled on the old homestead now owned by Mrs. Fred Lage. In 1893, the children having married, Mr. and Mrs. Lage moved to Gladbrook whre they enjoyed the fruits of thier labor until 1896 when the faithful husband passed to the great beyond. Mrs. Lage has been in poor health for some time and has suffered more or less dropsey for a year or more. The funeral services were held from German Lutheran Church Sunday at 9:00. Rev. Specht delivered an address in German and Rev. Bentz spoke in English. Internment followed in Maple Hill cemetery. Those that were present from afar were: Mr. and Mrs. Adolph Lage and Anna Jacobs of O'Brien county, Henry Speth of Davenport, a brother of the deceased, Peter Stoeltenberg of Durant, Iowa, Claus Alberts of Shelby county, William Steffen of Lindon, Minnesota, John Steffens of Flagstone, Minnesota. Catherine was born on 9 November 1828 at Schönberg, Germany.2 She was the daughter of Iwen Speeth and Antje Arp. She married Jochim Lage on 19 October 1850 at Schönberg, Germany.2 Catherine died on 23 January 1908 at Gladbrook, Tama County, Iowa, at age 79.2

Children of Catherine or Trien Speth and Jochim Lage

F
Annie was born at Schönberg, Germany.1 She was the daughter of Jochim Lage and Catherine or Trien Speth. Annie died at Paullina, Iowa.

F
Lena was born at Schönberg, Germany.1 She was the daughter of Jochim Lage and Catherine or Trien Speth. Lena died at Lincoln Township, Tama County, Iowa.

M
Frederick was born at Schönberg, Germany.1 He was the son of Jochim Lage and Catherine or Trien Speth. Frederick died at Lincoln Township, Tama County, Iowa.

M
Gustave was born at Schönberg, Germany.1 He was the son of Jochim Lage and Catherine or Trien Speth. Gustave died at Paullina, Iowa.

Johannas N. Lage who was a prosperous and extensive livestock raiser on his thoroughly good farm of 252 acres in Section 19 of Grant township has acquired fine compentency and an honorable standing solely from his individual labors and forthought. He is the solid type of German Americnan, born in Holstein, Germany the fatherland on the 19th of December 1856. The son of Jochim and Catherine [Speth] Lage. The parents also were born in Germany, the father November 16, 1817 and the mother February 9, 1828. Six of their nine children survive of which Johannes N. is now the oldest son. The parents imigrated to this country in 1864 locating first in Scott County, Iowa where the father rented a farm for 4 years. In 1868 he located on 320 arcres of land in Section 28, Lincoln township, Tama County, Iowa, but was unable to completely pay for the property until 10 years thereafter. Eventually he became one of the most prosperous farmers in the township owning about 1000 acres of land. In 1893 he returned to Gladbrook where both he and his wife died. Johannas was 9 years of age when the family moved from Scott to Tama county. He received his education in the schools of Lincoln and remained at home until his marriage in 1883. He then rented a farm in Grundy county which he operated for a year and in 1884 purchased 160 acres of his present farm and homestead in Grant township. He has since added 92 acres to the original place and made all the improvements himself and became favorly known as a stock raiser and feeder.
He votes the Democratic ticket, but has been too busy developing his livestock interests to give even his thoughts to politics.
Mr. Lage was married April 14, 1883 to Miss Amelia Volkens, also a native of Holstein Germany. Born to Carlston and Annie [Raimers] Volkens, both of who spent their lives in the fatherland. Mrs. Lage immigrated to the United States alone in 1880. Four Children have been born to Mr. and Mrs. Lage. The three who survive are as follows, Minnie now the wife of Alfon Strobehn of Grant township, and Alma and Albert C. both at home.

J.N. Lage, 81 Passed Away At His Home Wednesday Afternoon; Was Ill Two Weeks Confined to Bed

Funeral services will be conducted Saturday afternoon, January 18, at 1:30pm at the residence in Reinbeck for Johannes N. Lage, 81 who died at 1:30pm Wedesday, January 15 from complications and old age. Rev. Christian Haupt, pastor of Amity church will officate and will be assisted by Rev. Alvin Boetcher, pastor of the Congregational church and burial will be made in Maple Hill cemetery near Galdbrook.
J.N. Lage was born December 19, 1859 at Kiel, Holstein, Germany, the son of Jochim and Christina Lage and came with his parents to the United States at the age of five in 1864 where the family resided on a farm near Davenport for nine years. They then moved to a farm near Gladbrook, Iowa, and on April 14, 1883 he was united in marriage to Emilie Volkens, who precided him in death September 7, 1935.
The couple celebrated their golden wedding anniversary about eight years ago in April, 1933. They moved to Reinbeck in 1912 to the house where Mr. Lage died. To this union were born four children, a daughter, Clara, died at the age of 11 in 1900. The surviving children are: Mrs. Alfon Strohbehn, Reinbeck; Mrs. Ralph Block and Albert Lage, Gladbrook. There are also five grandchildren and three great grandchildren.
Also surviving are two brothers. Herman Lage, Reinbeck; Theo. Lage of Gladbrook, and one sister, Mrs. Lena Lundt, of Gladbrook. Three brothers and two sisters preceded him in death.
Johannas was born on 19 December 1859 at Schönberg, Germany.2 He was the son of Jochim Lage and Catherine or Trien Speth. He married Emelia Volkens on 14 April 1883 at Grundy Center, Grundy County, Iowa.2 Johannas died on 18 January 1941 at Reinbeck, Grundy County, Iowa, at age 81.2

M
Herman was born at Schönberg, Germany.1 He was the son of Jochim Lage and Catherine or Trien Speth. Herman died at Lincoln Township, Tama County, Iowa.

M
Theodore was born at Davenport, Scott, Iowa.1 He was the son of Jochim Lage and Catherine or Trien Speth. Theodore died at Gladbrook, Tama County, Iowa.

M
Henry was born at Davenport, Scott, Iowa.1 He was the son of Jochim Lage and Catherine or Trien Speth. Henry died at Tama County, Iowa.

Services for Dala Hulme, 77 of Reinbeck, who died at Grundy County Memorial Hospital in Grundy Center, will be 11 am Wednesday at United Church of Christ in Reinbeck; burial in Reinbeck Cemetery; she is survived by a son Willard Hulme of Reinbeck; two daughters, Mrs Ray Kreman of Crawford, Nebraska, and Mrs. Leo Block of Gladbrook; nine grandchildren and a great-grandchild; four brothers, Fred, Roy and Louis Staker of Reinbeck, and three sisters, ZMable Boege and Mrs Lester Lorenz, both of Reinbeck, and Edna Beckwith of Gladbrook; friends may call any time at French-Hand Funeral Home in Reinbeck; a memorial fund has been established. Dala was born on 2 November 1906 at Tama County, Iowa. She was the daughter of Julius Staker and Lillian Sienknecht. She married Wilmer Hulme on 24 October 1934 at Nashua, Chickasaw County, Iowa. Dala died on 8 July 1984 at Grundy Center, Grundy County, Iowa, at age 77. 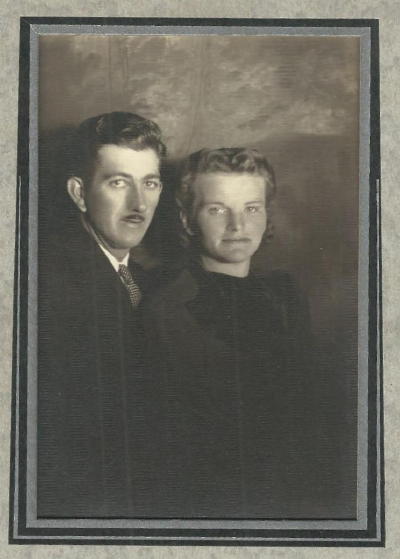 Edna was born on 28 March 1908. She was the daughter of Julius Staker and Lillian Sienknecht.