F
Joan was born.1 She married John (Rev.) Youngs before 1633 at Southwold, England.2

Moses was born on 24 January 1668/69 at Ipswich, Essex County, Massachusetts.1 He was the son of Thomas Burnham and Lydia Pengry.

Lydia was born on 6 December 1674 at Ipswich, Essex County, Massachusetts.1 She was the daughter of Thomas Burnham and Lydia Pengry.

Aaron was born on 12 September 1676 at Ipswich, Essex County, Massachusetts.1 He was the son of Thomas Burnham and Lydia Pengry.

Eleazer was born on 5 September 1678 at Ipswich, Essex County, Massachusetts.1 He was the son of Thomas Burnham and Lydia Pengry.

Lydia died. Lydia was born.1 She married Robert Clements before 1615 at Ansley, County Warwickshire, England.2,3 Lydia NN---- was present at John Clement's christening on 22 October 1620 at Narborough, county Leicester, England.4,5 Her body was interred on 12 March 1642/43.1


Walter Antrobus of St Albans is mentioned in the Corporation Records as being a Warden of the Shoemakers Company in 1588, and in 1614 one of the "Assistants." His firs wife Barbara Lawrence left no surviving issue.


Sarah's will dated 15 December 1699. Whereas the rest of my children have had their portions that their father and myself gave them in full and as my son William Wickham is indebted to the estate of my husband which was left to my disposal 10lbs. I will that my son William shall pay that 10lbs to my son Thomas for my daughter Sarah Hudson in part of the 20lbs which we intended for her and as my son Thomas is engaged to pay 10lbs to be received by him of a debt my will is that he pay my daughter Sarah Hudson die, before the making good this will the 10lbs be paid to her son John Cherry the other 10lbs if she die to go to John Cherry. I give to my son Samuel Wickham 40s. in silver, to Joseph 20s. in silver beside the 5lbs he received from Jonathan Strickland at L.I.. I give to my grandson John Cherry 40s. I appoint son Thomas executor.
Cherry.
Sarah was born circa 1629.1 Sarah died on 7 January 1699/0 at Wethersfield, Connecticut.1

M
John was born.1 He married Sarah Wickham on 26 June 1669 at Wethersfield, Massachusetts.

M
Thomas was born.1 He was the son of John (Col.) Youngs.

F
Bethiah was born.1 She was the daughter of John (Col.) Youngs.

F
Deborah was born.1 She was the daughter of John (Col.) Youngs. 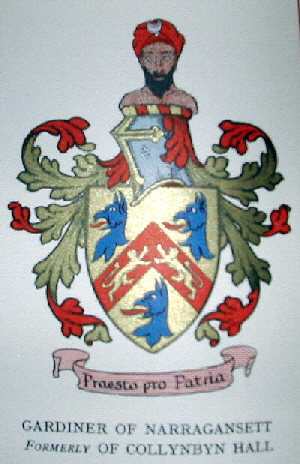 Lion was born circa 1599 at England.1 He married Mary Dirksdr Deurcant before 1635 at Worden, Holland.2,3


Lion Gardiner lived in one of the grand epochs of modern times; that which witnessed the rise of the Republic in Holland, the establishment of the Commonwealth in England, and the colonization of the Puritans in New England. He was born in the days of Queen Elizabeth, the House of Sturart. In the struggle between the King and Parliament, he adhered to the Parliament party; was a dissenter, and friend of the Puritans.

Volunteering to maintain the Republican standard in Holland, he went thither with English allies under Lord Vere in the time of Charles I. Here he became Lieutenant of Engineers and Master of works of Fortification in the legers of the Prince of Orange in the Low Countries. While there, eminent Puritans, acting for a company of Lords and gentlemen approached him with an offer to go to New England in company with John Winthrop Jr. build a Fort with houses for men of Quality expecting to settle there, and lay out a town on the new plantation in project at the mouth of Connecticut River. The offer was accepted through the persuasion of Hugh Peters, pastor of a Church of English exiles at Rotterdam, and John Davenport a dissenting minister from London. He was to receive 100 pounds per annum for a term of four years, himself and family furnished transportation, and subsistence, to the place of destination, to serve the company only in the drawing, ordering and making of a city, town and Fort of defence, under direction of John Winthrop the younger.

On 10 July 1635 Lion Gardiner left Worden, taking passage at Rotterdam for London, and on 16 August set sail for New England, being 3 months and 10 days from Gravesend to Boston. Early in 1636 the good ship "Batchelor" of twenty-five tons, which had carried himself and family safely from Holland to England and across the Atlantic, through many tempests, bore them safely to their destination. The passengers are mentioned as 12 men and 2 women with freight for the construction of the Fort. Iorn work for two drawbridges; consisting of 62 staples, 40 staple hooks for Port-cullis, 4 chains, 10 boults, 4 plates, 8 chain-clasps, 4 under-hinges, 23 1/2 yards of red flagg-stuff, small lines and a wheel-barrow are mentioned. Lieutenant Gardiners household consisted of himself aged 36, his wife Mary aged 34, Elizabeth Collett, maid servant age 23, and William Jope workmaster aged 40, who all brought certificates from a Calvinistic church in Holland.

With the men and means at his command, a Fort of square hewn timber, with ditch and palisade, was soon consturcted; that could not be successfully assailed by approaches on firm ground. After commanding the fortress for four years, laying out into squares the entire acreage within the Neck-Gate, perambulating and surveying the country fro ten miles around, balzing trees and setting up mere-stones to mark the town-boundry, Lion Gardiner of trading closth from the Montauk Indians, an island laying adjacent to what is now the town of Easthampton on Long Island and which now bears his nam, he removed thither with his family; taking soldiers from the Fort to defend, and being under cultivation the 3000 acres his purchase comprised. It was the earliest English settlement within the limits of present State of New York.

In Wyandance, a younger brother of the grand Sachem who lived on Shelter Island, he found a trusted friend. Gardiners Island being open to Indian depredations without such an ally, would have been a more hazardous spot than Saybrook Fort menace by 700 Pequot warriors. By such friendly relations, he was able to foil conspiracies against English settlements of older date. After 13 years on the Island, he removed to East-Hampton, where he died in 1656 aged 63 years. The Island which he gave to his wife, she bequeathed to her eldest son David; "en-tail" to the first male heirs following forever. Right to the Island was confirmed by grant from the Earl of Sterling, whose patent included territory in which it was embraced, after the islands of the Sound passed to New Netherlands. Under the grant, David Gardiner could make such laws as he pleased, for civil and church government; if "according to God and King."

In 1664, the English having dispossed the Dutch at New Netherlands, Gardiner obtained from Governor Nichols a new grant, for a quitrent of 5 pounds a year. In 1683, the Island was attached to the County of Suffolk for taxable purposes. David Gardiner feeling aggrieved, petioned the Governor for relief; praying for an Independent Jurisdiction for the Island. Governor Dougans confirmatory grant, created the Island in 1686, "One Lordship and Manor of Gardiners Island". Practically this did not change anything, as the Island was created a Manor by the Earl of Sterlings grant to Davids frather Lion Gardiner. The original document conferring this title, with the unique seal of the Province, is a trophy still preserved; also the Geneva Bible with its family record in Lion Gardiners handwritting. Thus the early proprietors were authorized to call themselves "American Lords."