Richard Trott was present at Robert Trott's christening at Pitminster, South Trendle, county Somerset, England.1 Richard was born.2 He was the son of William Trott.

Francis Menifield Brown was born in Virginia. He was the son of William Brown. It is believed that his mother was the daughter of James Strother and her mother a Coleman. It is believed that Francis was born in Fauquier or Culpeper County because of a civil court case his father, William Brown, was involved in, indicating his presents in these counties about the time Francis was born.


1791, Francis arrived in Garrard County, Kentucky as an infant with his family. This is known due to the father's civil court case summons and the fact that he was proceding to Kentucky at the same time. A brother of William Brown stated to the sheriff of Culpepper County, Virginia that William was in Fauquier County and was in the process of leaving for Kentucky.


1 September 1812 Francis took a six month military enlistment for A.B. Bell and participated in the War of 1812. He served as a private in Captain James Anderson's 7th Company of Lt. Col. William Jennings 2nd Regiment-Kentucky Militia. Also serving as privates with him was John Blankenship and William Marksbury.


Francis Brown served all through the War of 1812 as a Private in Captain Anderson's and Davidson's Companies, Second Regiment Kentucky Volunteers Militia. And in the battle of the Thames in Canada, he saw Tecumseh killed. The Indian and Colonel Whitley were locked in a death embrace and had killed each other with knives.


13 December 1827 Francis and Martha Brown made a government land purchase from the District Land Office at Crawfordville, Indiana while they were living in Washington County, Indiana. The Land consisted of 160 acresin the NE 1/4 section, T15N, R4W (deed entry record, page 107) Monroe Township, Putnam County, Indiana. Land certificate #6077 dated 2 April 1829. 1831 Francis M. Brown supposedly went to Crawford Co., Illinois where the town of Robinson now stands to look over the area before relocating his family to this area. He probably went to see Nicholas S. and Elizabeth (Radcliff) Smith and stayed with them during his visit. 14 September 1832, upon returning from his trip to Crawford Co., IL, he decided to sell out and move. Francis M. and Martha Brown sold most of their land to John Coombs for $600.00 located in the NE 1/4 of section 9, T15N, R4W less 40 poles square in the NE corner of the NE 1/4 of section in Monroe Township, Putnam Co., IN (deed record B, page 429). Witness: Rober C. Brown and William Brothers. Francis sold a 40 poles square parcel in the NE corner of the NE 1/4 of section 9, T15N, R4W to Daniel Banks (his nephew and son of William and Elizabeth (Brown) Banks for $40.00 (deed record D, page 257).


1832 Francis M. Brown came to Crawford Co., IL to the east side of the village of Robinson (which did not exist at this time) and entered 160 acres of land. He was a native of Virginia, from whence he had gone to Garrard Co., Kentucky, thence to Washington and Putnam Counties, IN, and finally to Crawford Co., IL. Nicholas S. Smith, a family connection of Brown's, had settled here, and it was through the representation of the former that Francis came here. The journey was made in a big schooner wagon drawn by two yoke of oxen. In this was bestowed the household effects, the wife, and so many of the eight children as could not make part of the way on foot. Two cows and a mare and colt completed his whole wordly possession, aside from the entry price of his land. On arriving here, the family found shelter in a deserted cabin built by William Patton, on the site of the old brickyard. Francis's land lay just beyond the limits of the present village, to the northeast, and when the question of erecting a cabin on this property came, there as the proposed site, a pleasent grove situated on a little knoll just east of the village, but Martha, always accustomed to wooded country, feared such an exposed situation, and desired the cabin built on lower ground in the edge of the timber. It was finally left to vote of the children, who, sharing the prejudices of their mother, decided in favor of the low land and timber. 30 November 1832 Francis M. and Martha purchased their first parcel from the District Land office in Palestine, Illinois consisting of 158.27 acres ($1.25 per acre) for $197.83 in being the NE 1/4 of section 34 T7N R12W in Crawford Co., Illinois. The land later became part of the town of robinson located in the northwest part. 1 September 1834 Francis M. Brown receives from the U.S. Government the certificate of ownership for the 158.27 acres that was acquired at the public land sale at Palestine, Illinois on 30 November 1832.

Francis, Martha Brown and a daughter are buried in the Davis Cemetery north of Robinson. 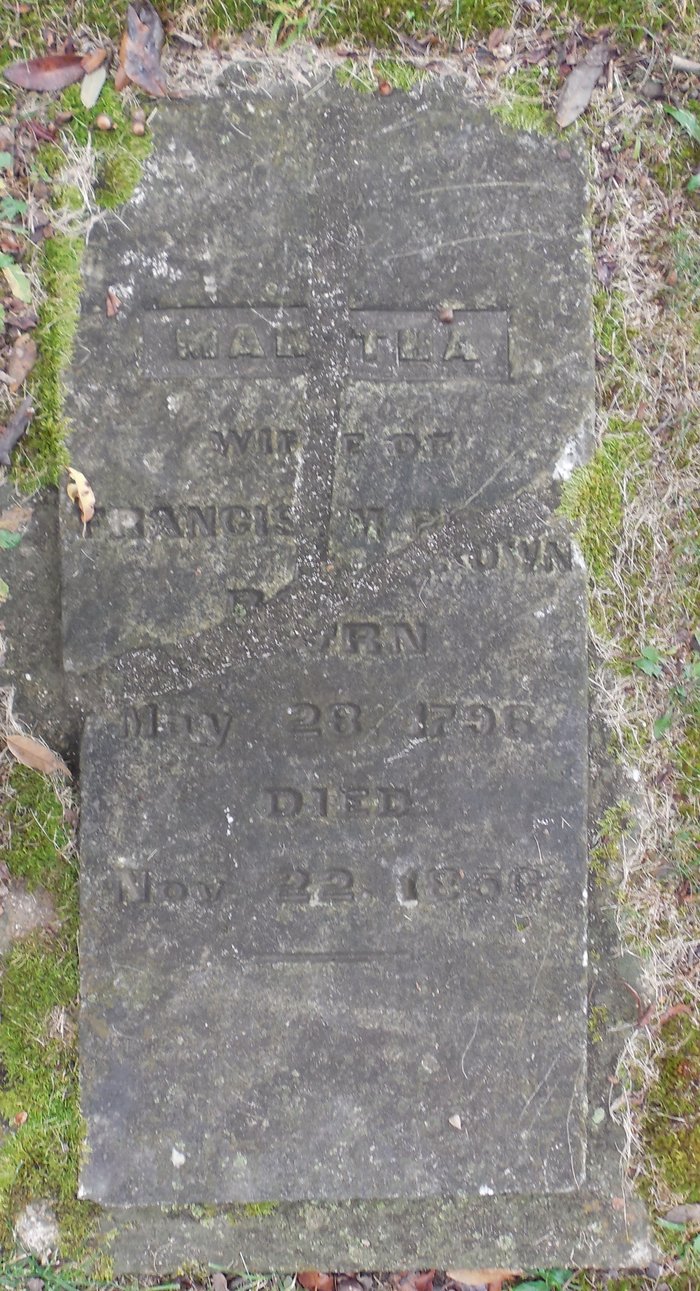 Ezekiel was born on 18 March 1757 at Killingly, Connecticut.1 He was the son of Ephraim Warren and Mary Brown.

Elizabeth was born on 27 September 1758 at Killingly, Connecticut.1 She was the daughter of Ephraim Warren and Mary Brown.

Tabitha was born on 28 December 1760 at Killingly, Connecticut.1 She was the daughter of Ephraim Warren and Mary Brown.

Lucy was born on 8 April 1763 at Killingly, Connecticut.1 She was the daughter of Ephraim Warren and Mary Brown.

Josiah was born on 20 December 1765 at Killingly, Connecticut.1 He was the son of Ephraim Warren and Mary Brown.

Louvina was born on 8 January 1767 at Killingly, Connecticut.1 She was the daughter of Ephraim Warren and Mary Brown.

Ephraim was born on 31 January 1780 at Killingly, Connecticut.1 He was the son of Ephraim Warren and Mary Brown.

Ephraim was born on 5 April 1702 at Chelmsford, Middlesex, Massachusetts.1 He was the son of Ephraim (Capt.) Warren and Abigail Burnham.


Ephraim Warren came with his parents to Plainfield, CT in 1703, and to Killingly, CT, about 1708. November 19, 1723 Ephraim, yeoman, of Kellingly, County of New London, deeded land to his well beloved son Ephraim Warren, husbandman, with the guildings there on. This farm was located south of the Whtstone Brook. He was voted in as an inhabitant of this town December 1, 1730. His father gave him 300 acres of land, lying on both sides of the Whetstone Brook in Killingly, April 15, 1732. He was an active member of the church on Killingly Hill until 1746, when he with others organized the church on Break-neck Hill. In 1762, he was appointed for the town of Killingly collector of the tax laid to repair the county jail.

He resided, at Killingly, Connecticut. He married Mary NN----.1 John was born on 2 December 1682 at Reading, Middlesex, Massachusetts.1

He was the son of John Brown and Sarah Barsham.2 John Brown Removed in 1711 to Killingly, CT and settled in the east part of the Town known as "Chestnut Hill" He was a man of itelligence and influence and left numerous descendants in 1711 at Killingly, CT.


" Sergeant Joseph Crocker, youngest son of Dea. William Crocker born in 1654, resided at West Barnstable. He inherited the north-easterly part of his father's farm, bounded easterly by the Otis and Hinckley estates. That portion of the ancient Crocker estate on the north of the County road and bounded easterly by the lands of Mr. John Smith was not included in his estate. His house was on the Meeting House road. If the records are correct, not far from the present location of the Cape Cod Railroad Depot. A reservation of three rods in width was made for that road. IN 1703 HE WAS RATED THE HIGHEST AND PROBABLY WAS THE MOST WEALTHY MAN IN BARNSTABLE. He was admitted a townsman in 1678; but does not appear to have been often employed in town or other public business. He was a sergeant in the militia company then an office of some honor."