M
Elkanah was born at Barnstable, Barnstable, Massachusetts.2 He was the son of James Hamblen Jr. and Mary Dunham.

James was born at England.2


As nearly all the first settlers of Barnstable came from London and the County of Kent, it is probable that James Hamblen, the ancestor, came from that city, as stated by Mr. David Hamblen in the New England Historic and Genealogical Journal. Of his early history little is known. He appears to have been an early member of Mr. Lothrop's Church, though the date is not found on the record. His son Bartholemew was baptized 24 April 1642, but the baptism of his older children, James and Hannah, do not appear on the record. It is probable that they were born in England, and that neither they nor their morther came over so early as the father. This was a common occurrence in early times. The father came over, and when he had provided a home sent for his family.

He was one of the earliest settlers, and was in Barnstable in the spring of 1639. His houselot, containing eight acres, was at Coggin's Pond, and was one of those that was presumed were laid out under the authority of Mr. Collicut. It was bounded northerly by the lot of Gov. Hinckley, easterly by the Commons, southerly by the Commons, and westerly by the highway, which at that time after crossing the hill on the west turned to the north on the borders of the pond, and thence, turned easterly, joining the present road at the head of Cave's Pasture Lane. In 1686 the present road was laid out through Hamblen's lot, and leaving a triangular shaped portion of it on the northof the road. The Hamblens were allowed to enclose that part of the old road situate between their land and the pond, and adjoining to Gov. Hinckley's.

Goodman Hamblen was not much in public life. He was an honest man, a good neighbor, and a sincere christian. He was industrious, and prudent in his habits, and brought up his children to walk in his footsteps. His descendants have, with few exceptionns, inherited the good quaalities of their ancestor. The Hon. Hannibal Hamlin, Vice President of the United States, is the only one among them who has been eminent in public life.

She married James Hamblen before 1638 at England.1,2 Anne died after 1690/91 at Barnstable, Barnstable, Massachusetts.3

F, b. 26 May 1731
Rebekah was born on 26 May 1731 at Barnstable, Barnstable, Massachusetts.1 She was the daughter of Ebenezer Scudder and Lydia Cobb. 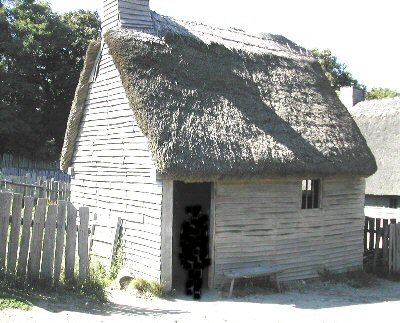 
Stephen Hopkins sailed in the Mayflower in 1620, one of the "Londoners" or "Strangers" recruited for the voyage. He was called "Master" and only two others of the 17 free men on the voyage were so styled. He seems to have originated from the family of Hopkins, alias Seborne, located for several generations at Wortley, Wotton Underedge, co. Gloucester. The Wortley historian has conjectured, after a thorough study of the family, that Stephen of the Mayflower may well have been son of Stephen Hopkins, a clothier of Wortley who also had a son Robert Hopkins of London.

Stephen Hopkins was probably the young man of that name who served as minister's clerk on the vessel Sea Venture which sailed from London 2 June 1609, bound for Virginia. The ship was severely damaged in a hurricane, and the company was washed ashore on the Bermudan "Ile of Divels" on 28 July. The 150 survivors were marooned on the island for nine months, building two vesses which ultimately took them to Virginia. During the sojourn Stephen Hopkins encouraged an uprising by his fellows upon grounds that the Governor's authority pertained only to the voyage and the regime in Virginia, not to the forced existence in Bermuda. For his remarks he was placed under guard, brought before the company in manacles and sentenced to death by court-martial. "But so penitent hee was and made so much moane, alleadging the ruine of his Wife and Children in this his trespasse," according to William Strachey's record of the voyage, that friends among his cohorts procured a pardon from the Governor. The two newly built vessels, the Patience and the Deliverance, arrived at Jamestown on 24 May 1610, but no evidence has been found of Hopkins' residence there, and it is presumed he soon returned to his family in England. Strachey noted that while Hopkins was very religious, he was contentious and defiant of authority and possessed enough learning to undertake to wrest leadership from others.

The home in England of Stephen Hopkins was just outside of London Wall on the high road entering the city at Aldgate in the vicinity of Heneage House. In this neighborhood lived John Carver and William Bradford of the Mayflower company; Robert Cushman, the London agent for the Pilgrims; and Edward Southworth, who later came to New England. Stephen was called a tanner or leathermaker at the time of the Mayflower voyage.

The name of Stephen's first wife remains unknown. No authority has been found for the oft published identification of her as Constance Dudley. His second wife was named Elizabeth, and it seems certain that the marriage of Stephen Hopkins and Elizabeth Fisher on 19 February 1617 at St. Mary Matfellon, Whitechapel, London, pertains to them.

Stephen, wife Elizabeth and children Giles and Constance by first wife and daughter Damaris by second wife, and two men servants, Edward Doty and Edward Lister, came on the Mayflower. Son Oceanus was born during the voyage. Upon the ship's arrival at Cape Cod 11 November 1620, Stephen was among the men sigining the Mayflower Compact in the cabin. He was one of three men designated to provide counsel and advice to Captain Myles Standish on the first land expedition of the Pilgrims in the New World. During the third day out, the company chanced upon an Indian deer trap, and Stephen was able to explain its function and danger to his fellows. In Februar of 1620, when Indians appeared on a neighboring hilltop, Captain Standish took Stephen Hopkins with him to negotiate with the savages. Thereafter, Stephen was invariably deputized to meet the Indians and act as an interpreter. In July of 1621 he served as envoy to friendly Chief Massasoit, and he made a friend for the colonists of Samoset, another Indian whom Stephen entertained in his home.

Despite the mortality caused by tribulations of the first Pilgrim winter in New England, Stephen Hopkins household of eight persons was one of only four households that escaped loss.

Stephen Hopkins was referred to as a merchant and a planter in Plymouth records, also as "Gentleman" and "Master". He received a six-acre lot in the division of land in 1623 and later had other plots by grant or purchase. It is stated that he kept for his home throughout his life at Plymouth the lot on the easterly corner of Main and Leyden Streets that had been assigned to him on arrival. He built and owned the first wharf in Plymouth colony of which there is record, selling it for sixty pounds in July of 1637. He built a house at Yarmouth on Cape Cod but returned to Plymouth and gave the Yarmouth dwelling to son Giles, who remained there.

Stephen Hopkins was made freeman by 1633 and served with sons Giles and Caleb and son-in-law Jacob Cooke as "Voluntary" in the Pequot War of 1637. He held the position of Assistant in the Colony from at least 1633 to 1636.

Probably because of his status in the Colony as a "stranger," Stephen Hopkins found himself on occasion in offical difficulty. In June of 1636, while serving as Assistant, he was fined for battery of John Tisdale. In 1637 and 1638 he was charged with various indiscretions involving the sale of intoxicants and other items at his dwelling. In 1638 he was found in contempt of court for refusing to deal fairly with Dorothy Temple, an apprentice girl, and in December of 1639 he was charged with selling a looking glass at an excessive price.

The will of Stephen Hopkins, dated 6 June 1644, was proved upon testimony of William Bradford and Myules Standish at a General Court at Plymouth on 20 August 1644. Calling himself of Plymouth in New England and "weake yet in good and perfect memory," he directed that his body be "buryed as neare as convenyently may be to my fyfe, Deceased." He made these bequests:

To Son Giles Hopkins the great bull now in the hads of Mris. Warren.

To Steven Hopkins "my sonn Giles his sonne," 20 shillings in Mris. Warren's hands for the hire of said bull.

To daughter Constanc Snow, wife of Nicholas, "my mare."

To daughter Deborah Hopkins "the brodhorned black cowe and heiffer and the white faced calf andhalf the cowe called Mottley."

To daughter Elizabeth "the cowe called Smykins and her calf and thother half of the Curld Cowe with Ruth and an yearelinge heiffer wthouta tayle in the keepeing of Gyles Hopkins at Yarmouth."

To four daughters Deborah, Damaris, Ruth and Elizabeth Hopkins, all the moveable goods that belonged to his house, "and in case any of my said daughters should be taken away by death before they be marryed then... their division to be equally devided amongst the Survivors."

To son Caleb, "heire apparent," house and lands at Plymouth, one pair of oxen and the hire of them, then in the hands of Richard Church, and "all my debts which are now oweing unto me."

The testator reserved to his daughters "free recourse to my house in Plymouth upon any occcation there to abide and rmayne for such tyme as any of them shall thinke meete and conveyent and they single persons." He named son Caleb as executor, and Caleb and Captain Standish as joint supervisors of the will.

The invetory of his goods, taken by Captain Standish, Thomas Willet and John Doane on 17 July 1644, listed livestock (fifteen neat cattle, a horse and other stock), household goods, clothing, tools and more than seventeen pounds owed to Hopkins by debtors. The estate was given a total value of about 130 pounds. The division of his moveable estate to daughters Deborah, Damaris, Ruth and Elizabeth was made by son Caleb and Captain Standish on 30 November 1644.

In his list of the Mayflower passengers, Governor Bradford included: "Mr. Steven Hopkins, and Elizabeth, his wife, and 2 Children, caled Giles, and Constanta, a doughter, both by a former wife; and 2 more by his wife caled Damaris and Oceanus; the last was borne at sea; and tow servants, called Edward Doty and Edward Litster." Taking note of changes after 30 years, Bradford wrote of the Hopkins family in the spring of 1651: Mr. Hopkins and his wife are both dead, but they lived above 20 years in this place, and had one sone and 4 doughters borne here. Ther sone became a seaman, and dyed at Barbadoes; one daughter dyed here, and 2 are maried, one of them hath 2 children; and on is yet to mary. So their increase which still surivive anre 5. But his sone Giles is maried and hath 4 children. His doughter Constanta is alos maried, and hath 12 children, all of them living, and one of them maried."

He was listed on a passenger list on 5 August 1620 at sailing on the "Mayflower". Stephen Hopkins witnessed :

The Pequot War was an armed conflict in 1634-1638 between the Pequot tribe against an alliance of the Massachusetts Bay and Plymouth colonies with Native American allies (the Narragansett and Mohegan tribes).

The result was the elimination of the Pequot as a viable polity in what is present-day Southern New England.

Most of the Pequot people, warriors or otherwise, were killed by the colonists and their allies, or captured and sold into slavery in Bermuda. Other survivors were dispersed. It would take the Pequot more than three and a half centuries to regain political and economic power in their traditional homeland region along the Pequot (present-day Thames) and Mystic rivers in what is now southeastern Connecticut. in 1634.

Children of Stephen Hopkins and Mary