Sibyl de Neufmarché was the daughter of Bernard de Neufmarche' Lord of Brecon and Nesta. Sibyl died. She married Miles Fitz Walter in 1121.

Nesta was the daughter of Osborn or Osbert Fitz Richard and Nesta of North Wales. Nesta died. She married Bernard de Neufmarche' Lord of Brecon.1

Child of Nesta and Bernard de Neufmarche' Lord of Brecon

Child of Bernard de Neufmarche' Lord of Brecon and Nesta

Gulbert died. Seen 1011, advocate of St. Valerie, protector of the monastery of Fecamp.

Nesta died. She married Osborn or Osbert Fitz Richard. Nesta was born. She was the daughter of Prince Griffith Llywelyn AP and Edith NN----.

The head and shield and defender of the Britons', gruffydd was little more than a warlord who was conspicuously successful in creating a personal hegemony in Wales and combating the English. The son of Llywelyn ap Seisyll, king of Gwynedd, and Angharad, the king of Deheubarth's daughter, he was slow and listless as a youth but grew into a courageous and ambitious leader who won Gwynedd and Powys in battle 1039 and defeated the Mercians. his conquest of Deheubarth took longer 1055. His alliance with Earl AElfgar of Mercia, whose daughter he married, sustained a long struggle with Harold Godwinson, but Harold's attack on his court at Rhuddlan 1062 led to Gruffydd's death at the hands of his own men and the destruction of his territorial dominion.
Griffith was born. He was the son of Llywelyn Seisyll AP and Angharad NN----. He married Edith NN---- circa 1057. Griffith died.

Eadwine was the son of Aelfgar and Aelfigifu NN----. died.

Burchard was the son of Aelfgar and Aelfigifu NN----. died.

Leofric was the son of Leofwine. Founder of the church of Coventry, seen as thegn from 1005, "dux" from 1026, Earl of Mercia by 1032. He married Godgifu Lady Godiva. died at Bromley, county Stafford, England. 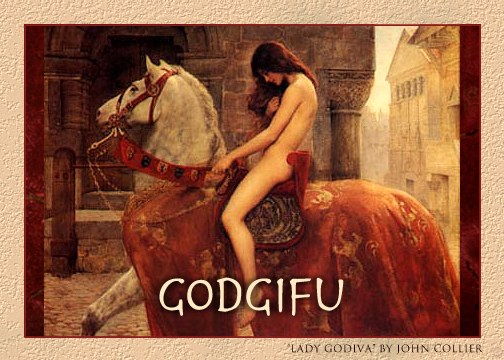 She married Leofric. Godgifu died. Sister of Thorold of Buckingham, sheriff of Lincolnshire. Godgifu's ancestry is uncertain, but she was evidently of an old, noble family. she is the "Lady Godiva" of legend.

Lady Godiva, fl. 1040-80, was an English noblewoman who, according to legend, rode naked through Coventry in order to persuade her husband, Earl Leofric of Mercia, to lighten the taxes on the townspeople. In one version, she was observed by only a tailor, the original Peeping Tom, who was struck blind.

"Among his other good deeds in this life, he and his wife, the noble countess Godgiva, who was a devout worshipper of God, and one who loved the ever-virgin St. Mary, entirely constructed at their own cost the monastery there [Coventry], well endowed it with land, and enriched it with ornaments to such an extent, that no monastery could be then found in England possessing so much gold, silver, jewels, and precious stones."

In this annal for 1057, the death of Leofric, Earl of Mercia, one of the three great earls of eleventh-century England, is recorded. A powerful political figure, it was Leofric who supported Harold's claim to the throne on the death of his father Cnut in 1035 and who averted civil war by mediating the quarrel between Edward the Confessor and Earl Godwin in 1051. Both Leofric and his wife, Godgifu, whose name means "God's Gift," were benefactors of the church, most notably the monastery at Coventry.

The legendary story of Lady Godiva is found in the Flores Historiarum by Roger of Wendover (died 1236). There he recounts that her husband, in exasperation over being implored to reduce the onerous taxes on the citizens of Coventry, agreed to do so if she would ride naked through the marketplace. This she did, covered only by her long hair:

A.D.1057...."Having founded this monastery by the advice of his wife the noble countess Godiva, he [Leofric], at the prayer of a religious woman, placed monks therein, and so enriched them with lands, woods, and ornaments, that there was not found in all England a monastery with such an abundance of gold and silver, gems and costly garments. The countess Godiva, who was a great lover of Gods's mother, longing to free the town of Coventry from the oppression of a heavy toll, often with urgent prayers besought her husband, that from regard to Jesus Christ and his mother, he would free the town from that service, and from all other heavy burdens; and when the earl sharply rebuked her for foolishly asking what was so much to his damage, and always forbade her ever more to speak to him on the subject; and while she on the other hand, with a woman's pertinacity, never ceased to exasperate her husband on that matter, he a last made her this answer, 'Mount your horse, and ride naked, before all the people, through the market of the town, from one end to the other, and on your return you shall have your request.' On which Godiva replied, "But will you give me permission, if I am willing to do it?' 'I will,' said he. Whereupon the countess, beloved of God, loosed her hair and let down her tresses, which covered the whole of her body like a veil, and then mounting her horse and attended by two knights, she rode through the market-place, without being seen, except her fair legs; and having completed the journey, she returned with gladness to her astonished husband, and obtained of him what she had asked; for earl Leofric freed the town of Coventry and its inhabitants from the aforesaid service, and confirmed what he had done by a charter."

Roger of Wendover, Flowers of History

A fourteenth-century chronicle says that, as a result, Leofric did excuse the town of all taxes except those on horses. A later chronicle adds that Godiva requested the townspeople to remain indoors during her ride. In the seventeenth-century, Peeping Tom became part of the legend, being struck blind or dead when he looked out his window. By the eighteenth-century, the story had assumed its present form, and by the nineteenth, its Victorian expression pictured above.

Two bibliographic notes:
Sometime before his death in 1095, Wulfstan, bishop of the cathedral at Worcester, ordered a monk there to write a history of England. It traditionally has been assumed that this chronicle was written to 1118 by Florence, but it seems more likely that the Chronicle of Chronicles was compiled from 1124 to 1140 by another monk, John, using the material collected by Florence and that authorship should be ascribed to John of Worcester.

Both Roger of Wendover and Matthew Paris were monks of St. Albans. Roger of Wendover began writing his Flores sometime after 1202, possibly as late as 1231, and continued it until 1234. From 1202, the material has no other surviving literary authority. More than half of Roger's work provided the basis for Matthew's more popular Chronica Majora, which he presented in abbreviated form as his own Flores Historiarum. Deleting some passages and adding others, Matthew Paris omits, in his retelling of the story, that Lady Godiva was accompanied by two knights and adds that her husband regarded her unseen ride as a miracle.

References: The Chronicle of John of Worcester: The Annals from 450 to 1066 (1995) edited by R. R. Darlington and P. McGurk, translated by Jennifer Bray and P. McGurk (Oxford Medieval Texts); Roger of Wendover's Flowers of History (1849) translated by J. A. Giles (Bohn's Antiquarian Library); The Flowers of History Collected by Matthew of Westminster (1853) translated by C. D. Yonge (Bohn's Antiquarian Library); Historical Writing in England c.550 to c.1307 (1974) by A. Gransden. and - 1992 Grolier Electronic Publishing, Inc.l.